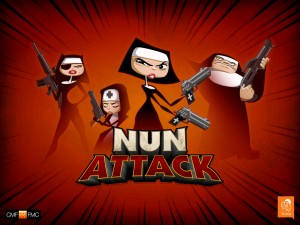 Quebec City – March 19, 2012 – Today Frima Studio drops the world’s deadliest squad of nun commandos on the PS Vita. More than two million players on iOS and Android have already commanded Eva, Rosy, Mandy and Olga in battle against their mortal enemy, The Fallen Nun, and the hordes of demons and undead she released on the world. Now PS Vita players get their chance to lock and load with some serious firepower in this tactical action game of biblical proportions for only $2.99.

Visit the in-game shop and stock your holy armory with more than 80 weapons before heading out on one of the 40 unique missions. Intuitive touch-screen controls direct the nuns through fast-paced combat while they unleash formidable miracles and the special powers by drawing unique symbols. Defeat hosts of ghoulish enemies and overthrow the Fallen Nun to restore balance to the world.

Download the press kit for more information and a variety of assets. Check out the trailer, visit www.nunattack.com and follow Nun Attack on Facebook for the latest from Frima Studio.