OUYA and Ludeme Games today announced that Chess 2: The Sequel will launch exclusively on OUYA Tuesday, January 21st. Chess 2 is the spiritual successor to the classic tabletop game; it combines the strengths of old chess with modern game design, and (empowered by the capacities of the OUYA platform) provides players with innovative new gameplay. The offline mode is free.

Chess 2 maintains the integrity of the game of chess, but provides a number of new mechanics in order to steer away from the rote memorization that has long dominated the game: there are now six armies to choose from, allowing for 21 possible matchups and making it nigh impossible to memorize an opening. This sequel also adds a double-blind bidding mechanic called dueling, which emphasizes adaptation and encourages players to try to read their opponent’s tendencies, and a “midline invasion” rule that spells a win for any player who advances their king past the middle of the board, effectively solving the issue of draws.

Ludeme Games is an independent game studio founded by game craftsman Zac Burns. When they craft their games, they treat the player with respect. Because to them, games are not simply diversions but the path of intellectual development. Along the way, they wish to share their insight and success with others traversing this space in the Renaissance of gaming. 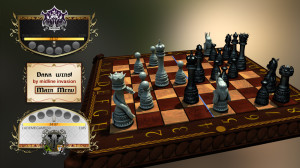