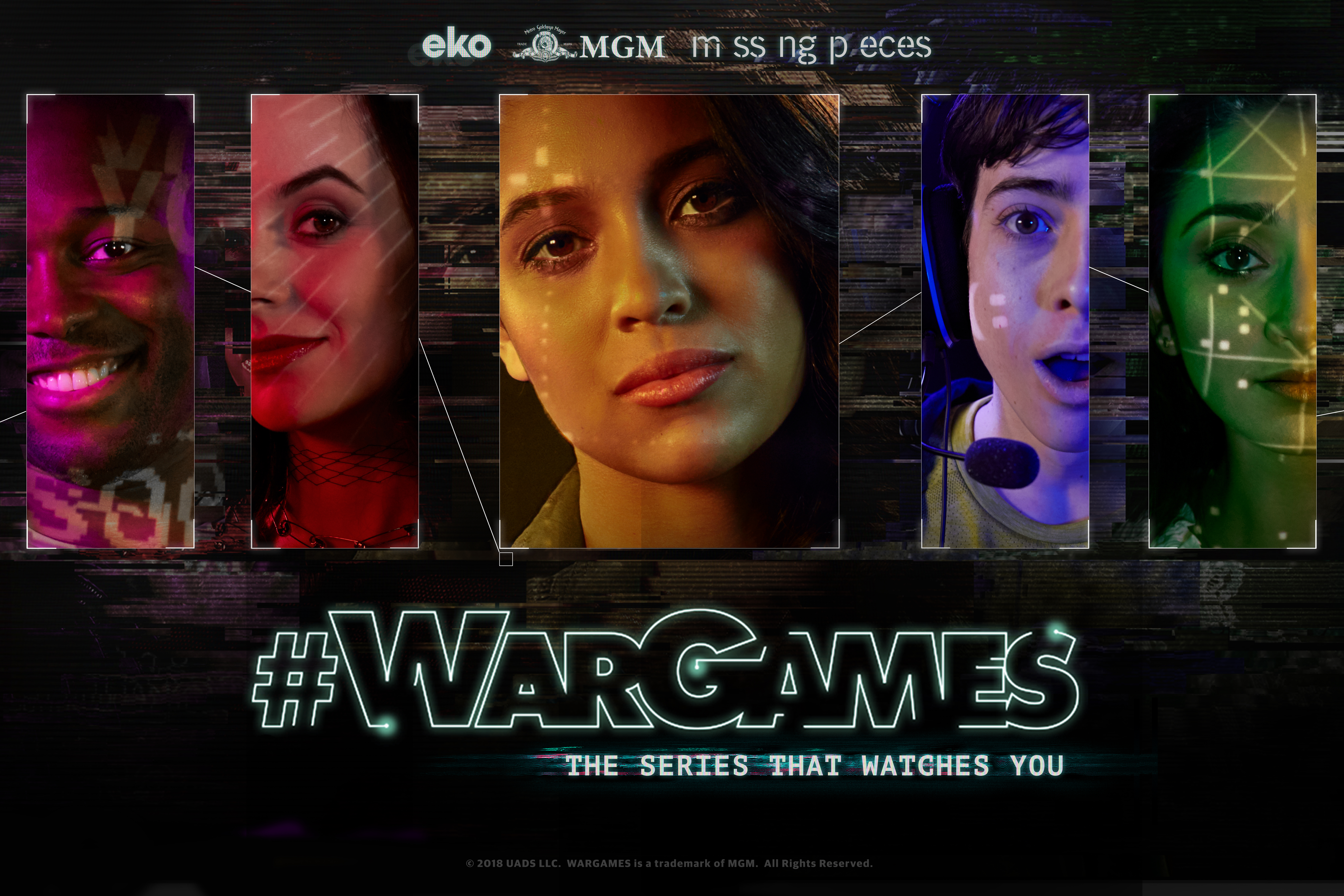 #WarGames, the series that watches you, now available on mobile, HelloEko.com, Vudu.com and Steam, with Xbox One coming soon

NEW YORK – March 14, 2018 – Eko today announced that “#WarGames,” the interactive series that reimagines Metro Goldwyn Mayer’s (MGM) three-time Academy Award-nominated 1983 feature film, is now available. The six-episode season is a new form of TV that is available now for free at HelloEko.com, the Eko iOS app and Vudu.com. It is also available ad-free on Steam for $2.99 and is coming soon to Xbox One.

Produced by Eko and m ss ng p eces in conjunction with MGM, “#WarGames” puts viewers in the middle of a tale of hacktivism, modern-day espionage and military intrigue. Viewers experience the story from the point of view of Kelly Grant, played by Jess Nurse (“Scandal”, “Grace and Frankie”), an ex-military brat who teams up with a group of fellow hackers seeking justice for her mother, a US Army sergeant who was killed in action. The group soon finds themselves caught in the middle of a power struggle between the CIA and the US military, fighting to make a difference on a global scale.

“With ‘#WarGames,’ I wanted to show hacking and hacker culture in a way that is true to the spirit of the original film,” said Sam Barlow, series creator. “The hackers in our story are clever, funny, and at the end of the day, they’re really just kids affecting the world in a way they didn’t quite expect. Each viewer goes on their own journey as they watch, and the way I experience the series is going to be different than the way you experience it, and we can compare notes. It’s TV unlike anything you’ve ever seen before.”

With Eko’s patented technology, viewers shape the story by tapping or clicking on the video feeds of each character they want to bring to the forefront. Each character adds a different perspective to the story, with many of the cast filming themselves via smartphone and webcam, placing the viewer amidst the action. Across episodes, the series tracks these choices and notes the viewers’ interests, resulting in personalized experiences. Unlike the passive experience of traditional TV, interactive series give viewers agency, and open up new opportunities for creativity and engagement. Different viewers will end up with alternate versions of the same protagonist that they subtly helped to create.

“In 2018, all forms of media – from social feeds to games and web browsing – are unique from person to person. TV is the only form of media that’s not personalized, and Eko is the company enabling it to catch up to the rest of the web,” said Yoni Bloch, CEO of Eko. “Series like #WarGames are uniquely built for how young audiences consume entertainment; digital native audiences expect to engage, and want more than flat, linear content. Interactivity allows viewers to participate in the story, explore, and ultimately builds connection between creators and viewers.”

About Eko
Eko is a pioneering interactive entertainment company that lets audiences shape stories as they unfold. Eko’s technology allows viewers to affect, control, and influence interactive entertainment like never before. The company provides a platform for interactive stories and partners with media companies, independent creators and top brands to create deeply engaging experiences for audiences. Stories are distributed through HelloEko.com, affiliate partners, and social networks; available on desktop, mobile and connected devices. The company has over 10 patents for its technology, including its proprietary player and authoring tools. Eko Studio, the company’s suite of authoring tools, is also offered for free to a community of creators who craft their own interactive experiences using Eko’s platform.

About Metro Goldwyn Mayer
Metro Goldwyn Mayer (MGM) is a leading entertainment company focused on the production and global distribution of film and television content across all platforms. The company owns one of the world’s deepest libraries of premium film and television content as well as the premium pay television network EPIX, which is available throughout the U.S. via cable, satellite, telco and digital distributors.  In addition, MGM has investments in numerous other television channels, digital platforms and interactive ventures and is producing premium short-form content for distribution. For more information, visit www.mgm.com.

About m ss ng p eces
m ss ng p eces is the new wave production and entertainment company inspired by the limitless potential of storytelling and technology. Hand-crafting stories and experiences that celebrate the human spirit, innovation, art and culture since 2005.