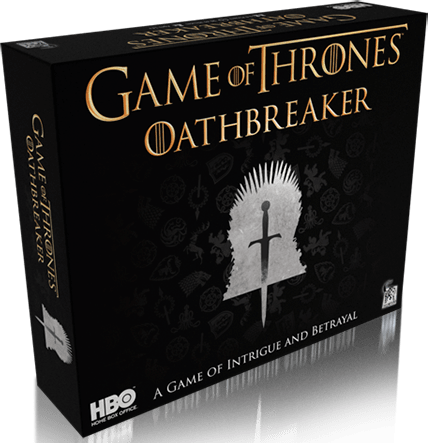 Denver, CO – March 12, 2019 – Dire Wolf Digital and HBO® are proud to announce Game of Thrones: Oathbreaker, a social deduction game of ambition and deceit coming to your tabletop just in time for the final season of the hit HBO® original series!

Game of Thrones: Oathbreaker is a game of deception for 5-8 players. One player claims the Iron Throne. The others become Lords and Ladies of the great houses of Westeros, scheming for the King’s favor, for power, or to bring a dynasty to its knees.

Loyalists square off against traitorous conspirators in a game where secret agendas intertwine, and only the wise can tell allies from enemies.

“We’re longtime fans of everything Game of Thrones” says Scott Martins, President of Dire Wolf Digital, “and we jumped at the chance to work with HBO® to translate the tension and intrigue of one of the best shows in the world to a game that fans of every level of gaming experience can enjoy. Betrayal’s never been so much fun.”

Lavishly illustrated with photos from the hit HBO® original series, Game of Thrones: Oathbreaker captures all the twists and turns of Westeros in a game that’s fast, fun, and strategic. Play as any of 12 unique characters as you connive and scheme your way to victory!

Find the press kit for Game of Thrones: Oathbreaker here.

Dire Wolf Digital is an independent game studio specializing in both digital and physical strategy card games and board games. Based in Denver, Colorado, the Dire Wolf Digital team includes more than 100 passionate designers, artists and engineers creating games for some of the world’s top brands, as well as original properties, including digital strategy card game Eternal, the hit board game Clank!: A Deck-Building Adventure, The Pokémon Trading Card Game Online, and an exciting lineup of upcoming digital and physical titles.

HBO Licensing & Retail, a division of Home Box Office, Inc., partners with best-in-class licensees around the world to give HBO’s global audience new and exciting ways to engage with their favorite shows. The division leverages iconic, award-winning HBO programs such as Game of Thrones, VEEP, Sex and the City, Silicon Valley, Insecure, The Sopranos, Big Little Lies, True Blood and more to create officially licensed consumer products, innovative merchandise programs, retail activations and live immersive experiences. HBO Licensing & Retail works across a broad range of product categories, including collectibles, apparel, publishing, live branded experiences, digital gaming, fashion and beauty collaborations, luxury accessories, and beyond. Officially licensed HBO merchandise can be purchased in retail stores around the world, online in the US at http://store.hbo.com, and at the groundbreaking HBO retail hub, the HBO Shop®, located at 42nd and 6th Avenue in New York City.