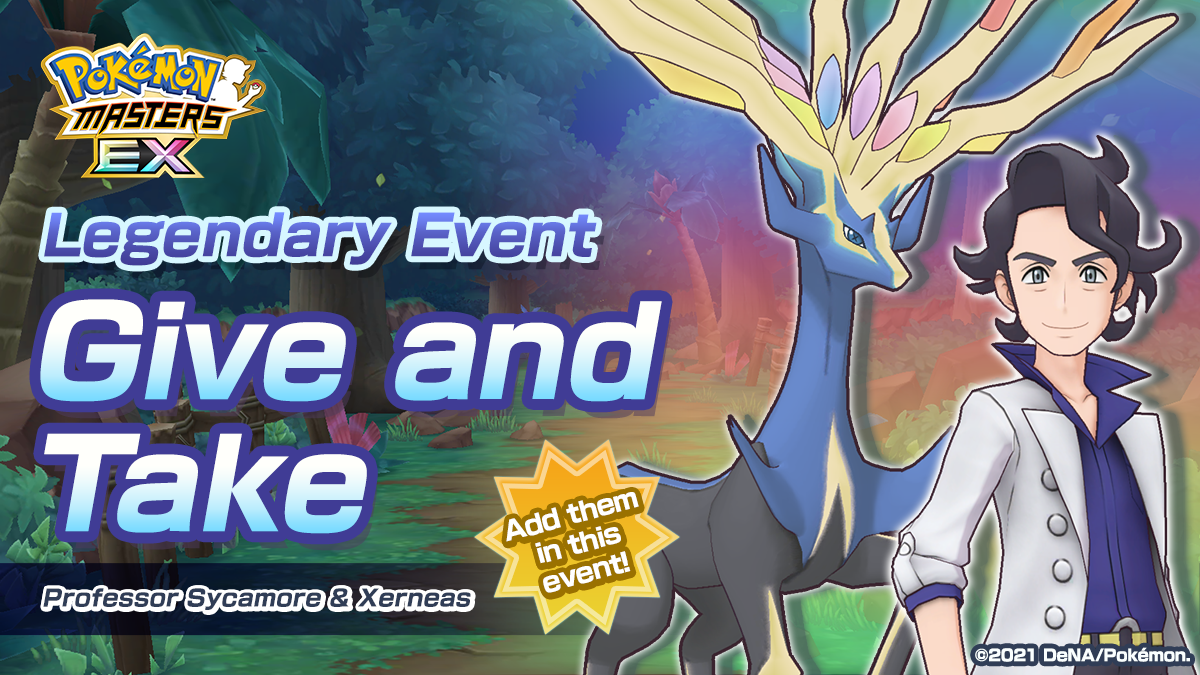 TOKYO—February 12, 2021—DeNA Co., Ltd., in partnership with The Pokémon Company, has announced that the Legendary Pokémon Xerneas and Yveltal are now available to add to players’ teams in Pokémon Masters EX. Xerneas forms a sync pair with Professor Sycamore of the Kalos region, while Yveltal joins forces with Lysandre, the boss of the Kalos region’s Team Flare.

Players will have the opportunity to interact with both of these sync pairs in “Give and Take,” a Legendary Event available from now until March 3, 2021 at 9:59 p.m Pacific Time for players who have completed Chapter 1 of the Main Story. In this event, players will join Professor Sycamore as he investigates the appearance of the Legendary Pokémon Xerneas on Pasio. Players that complete this event will have Professor Sycamore & Xerneas join their teams.

Lysandre & Yveltal will be available in the sync pair spotlight scout, available from now until March 3, 2021 at 9:59 p.m Pacific Time. This Flying- and Dark-type sync pair can deploy moves like Oblivion Wing, which restores HP depending on the amount of damage dealt to the opponent.

A message from the Pokémon Masters EX team highlighting upcoming one-and-half-year anniversary updates can also be found in the In-Game News section of the game. In this message, the team previews the sync pair of Piers & Obstagoon and Master sync pairs, which have exceptional capabilities that can strengthen a player’s entire team.

To commemorate the upcoming one-and-a-half year anniversary, players that log in to the game daily from now until February 27 at 9:59 p.m. Pacific Time can earn up to 1,500 gems. The Pokémon Center has also been re-decorated and is accompanied with new background music.

All assets can be downloaded here.