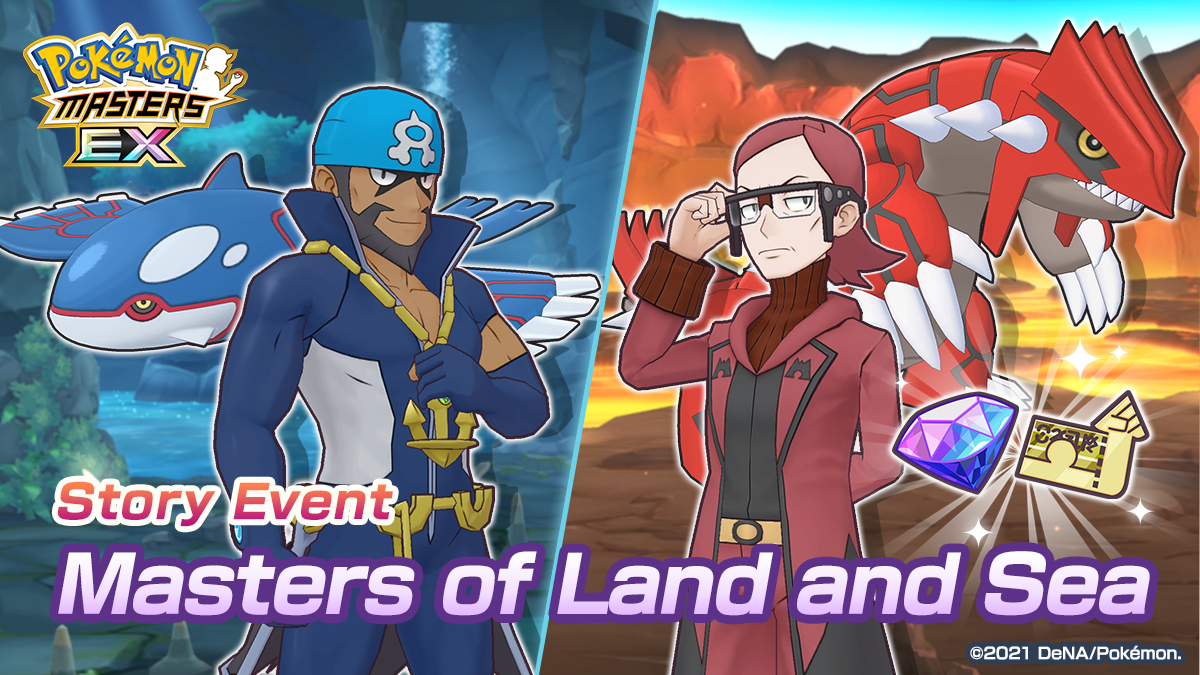 TOKYO—June 1, 2021—DeNA Co., Ltd., in partnership with The Pokémon Company, has announced that players will be able to add Master sync pairs Archie & Kyogre and Maxie & Groudon to their teams in Pokémon Masters EX. These duos join Leon & Charizard as the only other Master sync pairs in the game, possessing a Master passive skill that can strengthen a player’s entire team.

Archie, the leader of Team Aqua, joins forces with the Legendary Pokémon Kyogre to form a Water and Electric-type Master sync pair. This duo has a passive skill that makes it rain on the battlefield, an ideal complement to “Open the Oceans!”, a move that sharply raises the player’s Accuracy and critical hit rate if it’s raining. Maxie, the leader of Team Magma, and his Legendary partner Pokémon Groudon, team up to form a Grass and Ground-type Master sync pair and can unleash an attack called “Precipice Blades”, which damages all opponents at once. Both sync pairs are available to add to players’ teams via the Master Fair Scout, available from now until June 29 at 10:59 p.m. Pacific Time.

A trailer showcasing Maxie & Groudon and Archie & Kyogre can be found here on the official Pokémon Masters YouTube channel: https://youtu.be/Q8PvrUz70Eo.

A story event called “Masters of Land and Sea” will be available from now until June 13 at 10:59 p.m. Pacific Time for players who have completed Chapter 1 of the Main Story. In this event, players join Maxie and Archie as they face off and eventually join forces with Legendary Pokémon Groudon and Kyogre. Players that log-in to the game daily during the event will be able to receive up to 800 Gems, along with other in-game rewards.

Special in-game events featuring Kyogre and Groudon were held in May in which the collective decisions of the player community dictated the number of rewards distributed. Based on these results, in which players battled to see if they could defeat Kyogre or Groudon more times, all players that log-in to the game from now until June 13 at 10:59 p.m. Pacific Time will receive 6,000 Gems and event-exclusive equipment.

All assets can be downloaded here: https://drive.google.com/drive/folders/1KrjlwgqfRzenyWTTrvaZwbijXKH_dNxf?usp=sharing