In Sushi Mushi, players will pick a monster and play against others to create sushi rolls, feeding their character as many rolls as possible. Gamers will create rolls by matching sushi bites according to color or shape. Advanced moves will utilize offensive and defensive rolls for bonuses, helping gain even higher scores. The player who scores the most points from their sushi roll creations by the end of three rounds will be crowned the victor.

Sushi Mushi utilizes asynchronous multiplayer and will feature Facebook Connect, letting players battle against friends and family whenever they want. Gamers can also play solo in the single-player snack mode to hone their culinary skills and achieve new Challenges. As players progress with their monster, they will gain new belt levels and collect Bento Buddies, furthering their massive sushi monster success.

Aspyr media has released a short preview trailer for the game. Sharpen your claws and check it out here: http://www.youtube.com/watch?v=J04nSdT4taw&feature=youtu.be. 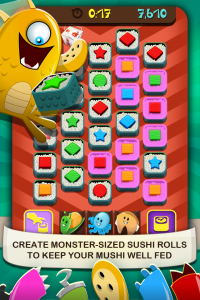 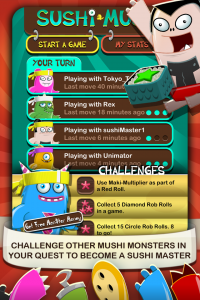 Check out the new preview trailer for Sushi Mushi at the following link: http://www.youtube.com/watch?v=J04nSdT4taw&feature=youtu.be

About Aspyr Media
Aspyr Media, Inc. is the leading publisher of Mac® and iOS games, bringing blockbuster gaming franchises including Call of Duty®, Sid Meier’s Civilization®, Star Wars®, and DOOM® to Mac computers around the world. Headquartered in Austin, TX, Aspyr develops, markets and sells games for the Mac which are delivered through physical retail and digital download services. More information about Aspyr and its games may be found at www.aspyr.com . All marks and trademarks are the property of their respective owners.