ATHENS – July 3, 2013 – Glasswing Studio, an independent game development studio based in Athens, Greece, today asked gamers to help bring its first title, the indie co-op FPS INSECTION, to PC, Mac and Linux in 2014 by supporting its newly-launched Kickstarter campaign. INSECTION, which is inspired by classic sci-fi films and games, will feature over-the-top 3D action as four players team up as a ragtag mercenary band trying to save the galaxy from an infestation of angry insects. The campaign, which will run through August 2, 2013, will be used to fund core development efforts, with stretch goals including Oculus Rift and other controller support.

INSECTION is Glasswing’s effort to create a co-op experience that can give players something different in each playthrough. With a wide range of different gameplay modes, mission types, weapons, and enemies, and four unique characters, including a fashionable robot, INSECTION will offer a AAA mix of content for an indie price. As a member of a motley crew of ex-military veterans, players travel through a vibrant, colorful universe, exterminating insects while uncovering a vast corporate conspiracy.

Backers of the Kickstarter campaign can receive a number of rewards, including: 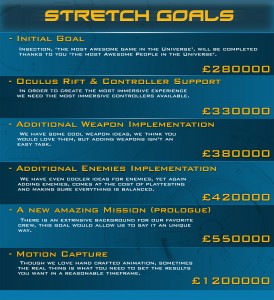 About Glasswing Studio
Glasswing is an independent game development studio with offices in Athens and London. A five-person team of experienced game designers who previously worked as subcontractors for large studios, Glasswing aims to join the team’s extensive experience with a lifetime of passion for gaming. With its first game, INSECTION, Glasswing is drawing on classic sci-fi movies and games to create an immersive, fun experience.