Team2Bit brings their hit indie title, Fist Puncher, to the OUYA next week as part of a two-game deal. Launched last year after a successful Kickstarter, Fist Puncher is the creation of brothers Jake and Matt Lewandowski as an homage to classic beat em’ up 8-bit brawlers of yesteryear. Adding two OUYA-exclusive characters to an already impressive roster of 15, Fist Puncher features more than 50 crime lord crushing levels and hits the OUYA store next Tuesday.

Fist Puncher is one of two games the Brothers L plan to bring to OUYA this year. During next month’s annual Game Developers Conference in San Francisco, they’ll debut their new indie to press and show attendees in the OUYA booth. Not much can be revealed just yet, but expect a pair of bitter rivals to join forces and determine the fate of the free world only on OUYA.

Fist Puncher brings the pain with these kickass features:

OUYA is a new kind of game console for the television that brings together an open development experience—where any creator can publish a game to the living room—with an accessible and affordable console at $99, with all games free to try. OUYA supports both the downloading and streaming of entertainment content in 1080p HD quality. Built on an open OS with a custom interface and store, OUYA focuses on the fun factor of games—games are organized by featured playlists and overall player engagement and not by revenue or downloads—enabling the most fun game experiences to shine. OUYA was envisioned by founder and CEO Julie Uhrman, and beautifully designed by award-winning designer Yves Behar.
Official Website | Facebook | @Twitter 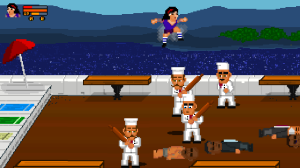 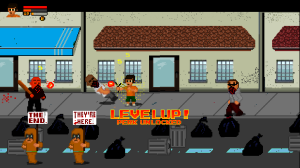