BOSTON – December 3, 2015 – Indie mobile game publisher Gameblyr and ZipZap Games, developers of the hit game Into the Circle, today announced that their follow-up title Sequence – Connecting Numbers is now available as a free download worldwide on the Apple App Store for iPhone, iPad, and iPod touch. In Sequence, players challenge themselves to solve sequential matching puzzles to complete and unlock new levels, while experiencing an ever-changing gameplay style and rapidly increasing skill-based problems to solve.

Sequence – Connecting Numbers features:
• CHALLENGE yourself through over 100 addicting fun levels
• CONNECT numbers together using sequence patterns and combos
• NEW gameplay mechanics as you level up so the game stays fresh
• RELAX and play a visual and audio treat!
• SOLVE innovative puzzle types and complete levels at their highest difficulty
• COMPETE with your friends on Facebook, beat their scores, and earn medals

“Making Sequence was a crazy rollercoaster for us during the four months of rapid development,” said Karoly Molnar, Co-founder, ZipZap Games. “We were inspired to bring something new to the popular and fun sequential matchmaking genre and looked to mix elements of causal titles such as Fairway Solitaire with math which resulted in a unique and challenging experience. We hope people enjoy the game.”

The game is now available as a free download on the Apple App Store here: https://itunes.apple.com/us/app/sequence-connecting-numbers/id1036803662?mt=8&ign-mpt=uo%3D2

About Gameblyr
Founded in 2013, Boston-based Gameblyr is a publisher of fine independent mobile games established on the principle that great independent games should not go overlooked. Committed to helping developers bring high quality mobile and cross-platform games to the market, Gameblyr offers a publishing model build to support indies to compete in today’s highly competitive environment. For more information, visit www.gameblyr.com.

About ZipZap Games
ZipZap Games is a small independent game development studio located in Hungary founded by an experienced team of developers. The studio released the hit title Into the Circle in May of 2015. ZipZap focuses on creating engaging and unique mobile experiences that are both challenging and original in design. ZipZap is currently working on bringing multiple titles to mobile next year and beyond. 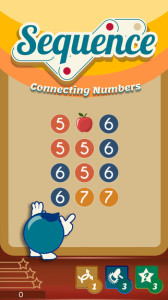