IRVINE, Calif. – Aug. 2, 2018 – Obsidian Entertainment and Asmodee Digital today announced the launch of Rise of the Goblins, a new content pack for Pathfinder Adventures on PC, iOS, and Android devices. The Rise of the Goblins offers a new adventure that puts players in the shoes of new goblin characters as they embark on a twisting tale of mischief and mayhem.

Rise of the Goblins is available now at a special launch price of $5.99 ($8.99 after this week) for PC, Mac, iOS and Android. Purchase and download links for Pathfinder Adventures are below:

Rise of the Goblins tells the other side of the Pathfinder Adventure story, and puts players in charge of the goblin attack on Sandpoint that kicks off the Rise of the Runelords campaign. Pathfinder Adventures players will get the opportunity to wreck the havoc they attempted to solve as Pathfinder’s legendary Iconic characters in the beginning of Rise of the Runelords, using updated cards that turn former barriers into boons, and vice versa. Drawing inspiration from the We Be Goblins! module for the Pathfinder tabletop RPG, Rise of the Goblins’ full-length campaign will give players the chance to experience the same type of engaging stories that brought the original Iconics to life – only this time, everyone is a goblin!

Veterans of the physical Pathfinder Adventures game will recognize Ranzak from the Skull & Shackles adventure deck and Poog from the Goblin Burn! deck, the two new goblin Iconics available for players to use in both the Rise of the Runelords and Rise of the Goblins campaigns. Ranzak and Poog have unique classes and powers from the other Iconic characters, and goblin versions of the original Iconics have also been added for players to build out their parties. Further building on the theme, Rise of the Goblins introduces new visual components (including a set of distinctly goblinoid dice) and gameplay updates to make the goblins feel even more real. 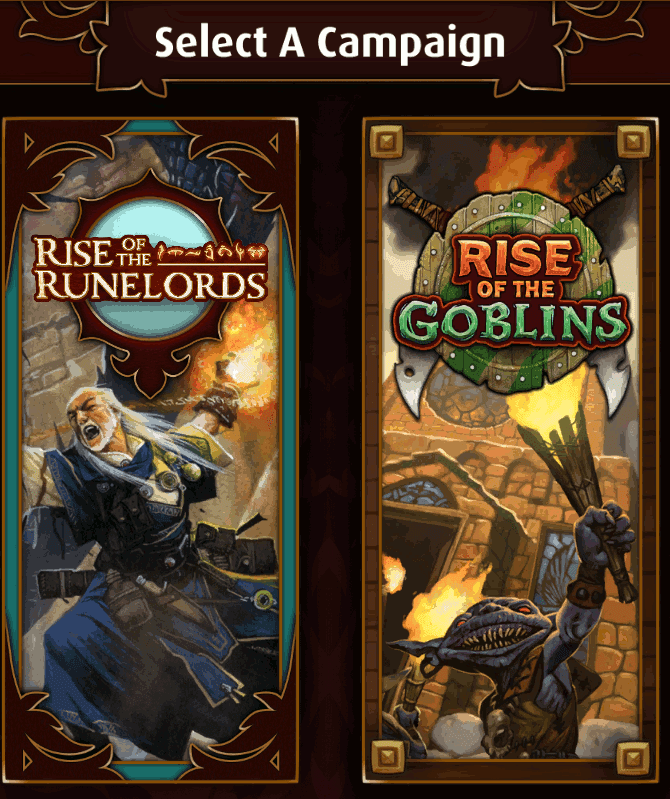 Obsidian Entertainment specializes in creating the world’s most engrossing interactive role-playing games. Founded by veterans of Black Isle Studios, our roots go down to Icewind Dale, Planescape: Torment, Fallout, and Fallout 2, all classics of the role-playing genre.

Obsidian continues its commitment to deliver fans and newcomers alike the most compelling RPGs we can imagine. Currently, Obsidian’s trailblazing developers are hard at work on a host of new projects, including the highly-anticipated Steam release of Pathfinder Adventures and the recently successful crowdfunding title, Pillars of Eternity II: Deadfire.

Assets
More information can be found on the Obsidian blog: http://forums.obsidian.net/blog/8/entry-204-pathfinder-adventures-rise-of-the-goblins