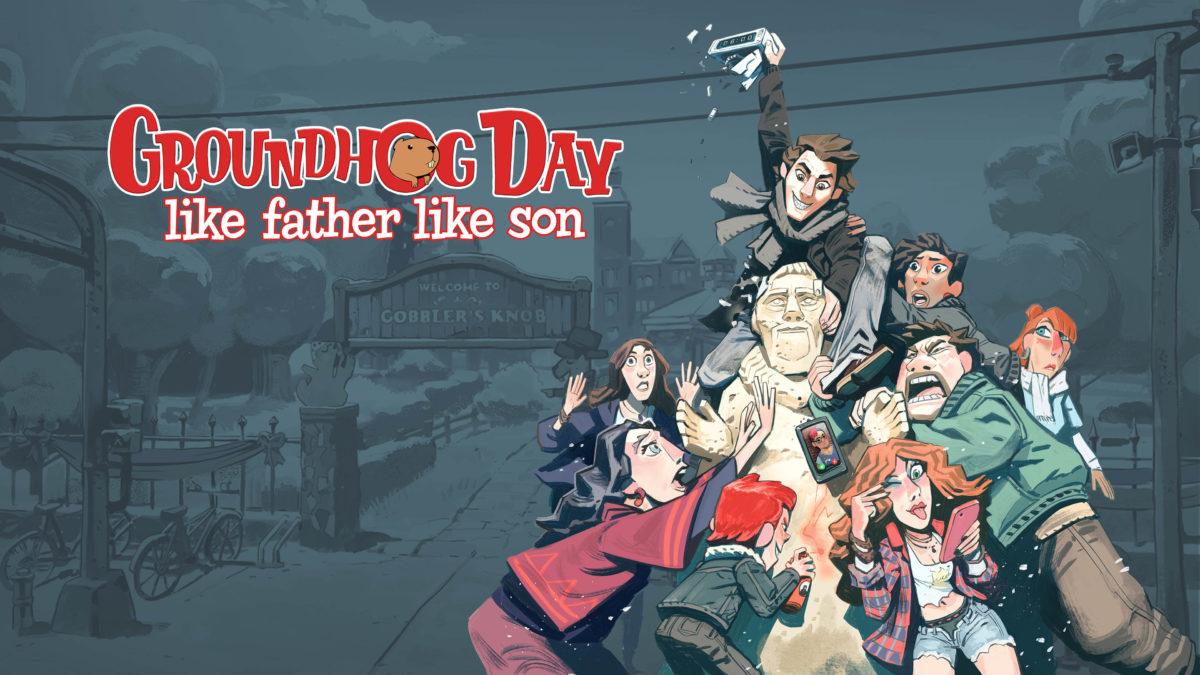 Los Angeles – Aug. 19, 2019 – Sony Pictures Virtual Reality (SPVR), MWM Immersive (MWMi), and Tequila Works today announced that “Groundhog Day: Like Father Like Son,” a virtual reality narrative adventure that takes place in the world of the film “Groundhog Day,” will launch on September 17, 2019. The game will be available globally on PlayStation® VR, Oculus Rift, and HTC Vive for $29.99.

In “Groundhog Day: Like Father Like Son” players assume the role of Phil Connors Jr., the son of Phil Connors from the iconic film, who returns to Punxsutawney, Pennsylvania only to become trapped in a time loop just as his father once was. Players will solve puzzles and explore the world introduced by the film as they try to break out of this time loop.

Featuring beloved places and personalities from the film as well as new characters, “Groundhog Day: Like Father Like Son” includes fun puzzles that players must overcome as they solve the mystery of their own time loop. Along the way, the charming but arrogant and social media-obsessed Phil Connors Jr. will learn valuable lessons about life, love, and family,

“At Sony Pictures Virtual Reality, we are focused on extending beloved IP into new mediums and reaching new audiences. ‘Groundhog Day: Like Father Like Son’ is a perfect example of that,” said Jake Zim, Senior Vice President of Virtual Reality at Sony Pictures Entertainment. “By continuing the world of ‘Groundhog Day’ in a VR game, we can introduce a new generation to the magic of the film and expand upon this universe. While the game introduces a new, modern story and protagonist, the themes explored by the original film remain true to this day.”

“Telling stories through new mediums is a focus of our work at MWM Immersive, and VR gives us an incredible opportunity to tell a fresh, modern-day Groundhog Day narrative,” said Ethan Stearns, EVP of Content at MWMi. “Extending a film’s narrative into an interactive medium can be difficult, but the world of ‘Groundhog Day’ was a perfect opportunity to combine a film’s unique storytelling archetype with a game’s core mechanic.”

“VR allows players to explore unique worlds, discover stories and interact with characters in entirely new ways,” said Raul Rubio, CEO and Creative Director of Tequila Works. “The iconic world and characters of ‘Groundhog Day’ are incredibly rich and memorable and we’ve used them as a jumping-off point for a contemporary experience and story.”

“Groundhog Day: Like Father Like Son” will be available for pre-order on PlayStation Store, Oculus Store, Viveport, and Steam starting tomorrow, August 20. PlayStation Plus members can pre-order the game at a discounted price of $26.99. For a limited time, pre-orders also include a code to download a digital copy of “Groundhog Day” the movie, available after the release of “Groundhog Day: Like Father Like Son” (available only in the US and Canada). In addition, the official soundtrack for the game will also be available digitally on September 17. The original 1993 film is also available now to watch again and again via disc and digital.

About MWM Immersive
MWM Immersive, a division of MWM, produces and distributes high-quality interactive entertainment with the world’s best storytellers.  Ethan Stearns, EVP, Content, oversees operations and the creative vision of MWMi. By using audience insights and engaging fandoms, MWMi connects audiences with innovative interactive storytelling in entirely new ways. MWMi is the division behind such groundbreaking and critically acclaimed projects as Dan Carlin’s “War Remains,” a fully immersive historical experience, and the category-defining “Chained: A Victorian Nightmare,” as well as Jon Favreau’s magical “Gnomes & Goblins” VR universe. In partnership with Sony Pictures, MWMi is innovating the world of VR games and experiences to elevate Sony’s slate of motion pictures and franchises such as the upcoming “Groundhog Day: Like Father Like Son.”

About Tequila Works
Tequila Works, S.L. is an independent boutique studio founded in 2009 by Raúl Rubio Munárriz (founding member of MercurySteam Entertainment, developers of Castlevania: Lords of Shadow) and Luz Sancho Rodríguez. Tequila Works’ first title, the BAFTA-nominated “Deadlight,” was published in 2012 by Microsoft Studios. The studio also released “The Sexy Brutale” , “RiME”, “WonderWorlds” and “The invisible Hours” and working on the upcoming “Groundhog Day: Like Father Like Son” with SPVR and MWMi and “GYLT” in partnership with Google for Google Stadia. Tequila Works’ philosophy is Creating with Gusto. The team consists of a healthy blend of talented veterans from the games, animation and comic book industries, all of whom enjoy challenging their creative talents and seeing the beauty and the craziness of the world with amazement every day. www.tequilaworks.com.