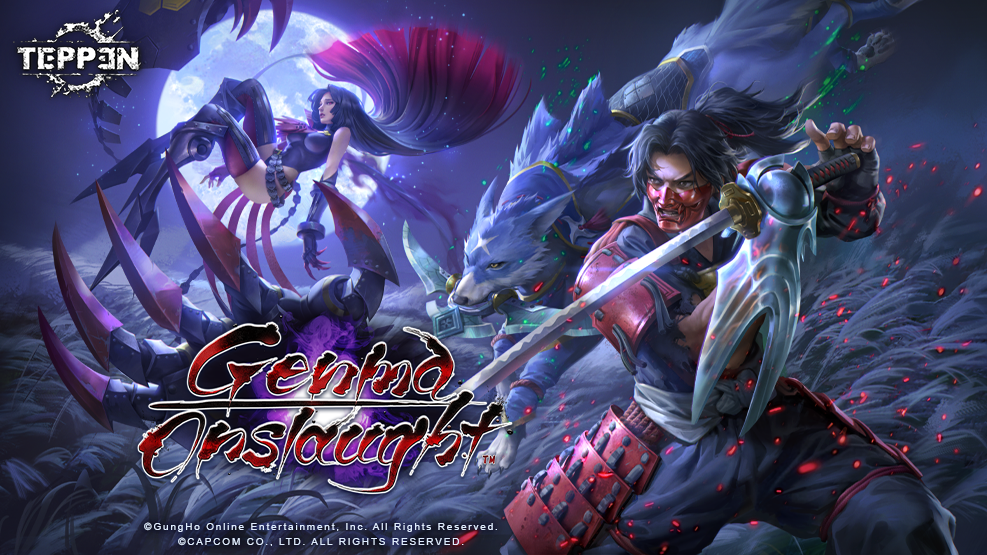 A new war rages against the demonic horde

TOKYO, Japan – April 28, 2022 – A fight begins in Amatsu no Kuni as “Genma Onslaught” launches in TEPPEN today. Join the battle against a demon horde with characters from Onimusha and Monster Hunter Rise, who join beloved characters from Breath of Fire, Street Fighter, the Mega Man series, and more.

A Fragile Peace is Shattered

The battle against the Goddess Myria is over, but the peace settling over Amatsu no Kuni does not last long. A horde of Genma, wicked demons that hunt the innocent, attack on the night of the full moon. Without Goddess Myria to watch over Inabayama Castle, the Gates of Hell opens. The freed Genma King, Fortinbras, enslaves the ninja village of Kamura, and turns it into a factory to transform the ninjas into Genma soldiers.

During the siege of Kamura, one hero escapes! Palamute from Monster Hunter Rise teams up with Akechi Samanosuke to save the kidnapped Princess Yuki and free Amatsu no Kuni from the Genma.

Coming to TEPPEN as part of “Genma Onslaught,” <Immolate> allows players to commune with Spirits. Place a card with low health on <Immolate> cards to trigger instant effects.

The evil Genma have turned people into weapons. Oichi has been corrupted and turned into Black card ‘Machine Armor Oichi.’ Demons may pour in from the deepest pits of hell, but heroes are rising up to meet them. The Red card ‘Onimusha Samanosuke’ and the Green card ‘Village Buddy Palamute’ lend their strengths to monsters like Purple card ‘Almudron.’ Here’s a look at Machine Armor Oichi:

Face a Rampage of monsters from Monster Hunter Rise and take back the Genma-controlled Kamura Village in a SP Mission, with first time clear rewards of Pack Tickets. After you finish beating back the army of hell, enjoy a campaign that brings new BGMs and items to the Soul Shop.

The “Ace vs. The People” card set rotates out of Standard Mode with the introduction of “Genma Onslaught.” The following card sets are no longer allowed in Standard Mode:

Assets for “Genma Onslaught” can be found here.

Download TEPPEN on the App Store, Google Play and the Amazon Appstore.

There’s only one way to Rise to the Top – playing TEPPEN! TEPPEN is the Ultimate Card Battle game where units you command operate in real time, featuring dynamic action with over-the-top attacks blowing up your screen. With astonishing graphics and a cutting-edge battle system, TEPPEN is the card game to end all other card games! Command popular Heroes (characters) from Monster Hunter, Devil May Cry, Street Fighter, Resident Evil, and other series in All-Star action from Capcom’s finest!

Capcom is a leading worldwide developer, publisher and distributor of interactive entertainment for game consoles, PCs, handheld and wireless devices. Founded in 1983, the company has created hundreds of games including ground-breaking franchises Resident Evil™, Street Fighter™, Monster Hunter™, Ace Attorney™, Mega Man™ and Devil May Cry™. Capcom maintains operations in the U.S., U.K., France, Germany, Tokyo, Taiwan, Hong Kong and Korea, with corporate headquarters located in Osaka, Japan. More information about Capcom and its products can be found at www.capcom.com or www.capcom-unity.com.

Capcom, the Capcom logo, Ace Attorney, Devil May Cry, Mega Man, Monster Hunter and Resident Evil are trademarks of Capcom Co., Ltd., in the U.S. or other countries. Street Fighter is a trademark of Capcom U.S.A., Inc.

TriplePoint on behalf of GOEA