The update includes the game’s localization in French, Italian, German, and Spanish, just in time for the Euro 2012 football championship build up. These European nations can now battle it out for the crowning glory in their own languages. Also included in the update is language localization for Japanese, Korean and Simplified Chinese.

The game will also be released for the first time in Japan, China, South Korea, Thailand, Malaysia, Hong Kong, and Singapore.

Big Win Soccer is FREE to download from the following mobile device stores:

For latest info on Big Win Sports, competitions and prizes go to www.facebook.com/BigWinSports

Hothead Games, headquartered in Vancouver, British Columbia, is an emotionally secure independent developer and publisher of groundbreaking downloadable titles. Maybe we don’t have a “make your own ice-cream sandwich bar” like some other game companies, but Hothead has brought to life original games such as the scientist-approved DeathSpank and the award-winning Sea Stars. Hothead is also partnering with cool indie studios to bring games like Braid to new platforms and new audiences. We also like to stand near really ugly people so that we appear more attractive ourselves.
Official Website | Facebook | @HotheadGames 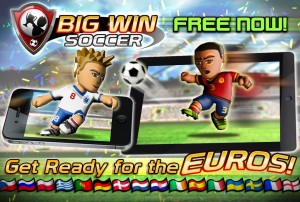