SAN FRANCISCO & LONDON – October 11, 2012 –  SEGA®of America Inc. and SEGA®Europe Ltd. are wickedly excited to announce Hell Yeah! Wrath of the Dead Rabbit™! downloadable content will be available on October 23 in North America and October 24 in Europe from Xbox LIVE® Arcade for the Xbox 360® video game and entertainment system from Microsoft, PlayStation®Network and PC Digital Download.

For Ash, the Prince of Hell, vengeance is neither short nor sweet. If you’re going to kill, you want to look hot doing it and take your time over your options. With over 50 masks for Ash and 11 driller skins available for his deadly jet pack driller, you can create hell in style using the Pimp My Rabbit pack for $2.99 /240MSP /£1.99 /€2.49 /AUD$4.25. Keep your eyes peeled for some classic SEGA franchise and characters making an appearance such as Jet Set Radio™, Super Monkey Ball™ and Crazy Taxi™.

Hold on; you thought that was it? You’re wrong. Test how hot your shooting and speed-running skills are in 50 thrilling challenges adding over three hours of gameplay with the The Virtual Rabbit Missions for $4.99 /400MSP /£3.69 / €4.49 / AUD$7.75. Only the mightiest rabbit can survive!

About Arkedo
Arkedo is a Paris-based studio comprised of eight game developers, and focused on making arcade games with a twist. Founded in early 2006, the studio’s award-winning DS titles (Nervous Brickdown, Big Bang Mini) and the eponymous XBLIG/PSN “Arkedo Series” were well received by the public, the press and, most importantly, our mums. Arkedo’s secret plan to rule the world is a weird combination of trying to make cool games, cooking great food, and being generally nice to everyone. It is with genuine astonishment we can today announce that this silly plan is working really well.

Microsoft, Windows, Xbox, Xbox 360, Xbox LIVE, and the Xbox logos are trademarks of the Microsoft group of companies.
“PlayStation” is  a registered trademark of Sony Computer Entertainment Inc. 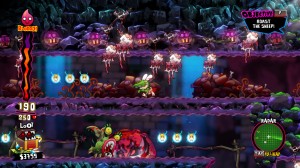 Additional screenshots for the Hell Yeah! Pimp My Rabbit pack may be downloaded here. 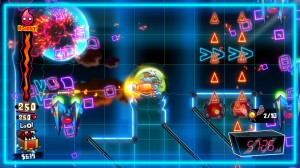 Additional screenshots for the Hell Yeah! The Virtual Rabbit Missions may be downloaded here.