Android sailors can now explore the online seas for weapons, blueprints, maps, and diamonds to build armed rafts, plunder other ships for loot, and protect themselves against enemy captains bent on snatching their booty. More resources means more dice to roll in battle and better preparation against attacks while the player is offline!

See the gameplay in action in the trailer.

The ocean outlaws have set sail for Android! Get Raft Pirates for free on Google Play today: http://play.google.com/store/apps/details?id=com.sixwaves.raftpirates

About 6waves
6waves is a leading publisher of independent games on social networks and mobile platforms, partnering with developers all over the world to bring the best games to the millions of users in its gaming network. From its original roots on Facebook, the company has now expanded into iOS and Android, Yahoo! Mobage, Mixi and Hangame in Japan, and Tencent in China. Headquartered in Hong Kong with offices in San Francisco, Moscow, Beijing and Tokyo, the team has a uniquely international perspective and has forged successful partnerships with developers from across the globe. 6waves’ investors include Insight Venture Partners and Nexon Co. Ltd.
Official Website | Facebook | @6waves 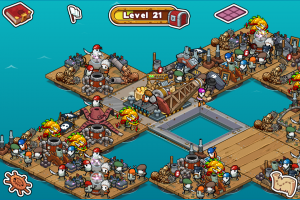