LICHFIELD, UK – June 5, 2014 – Get ready to pledge your allegiance (but dodge the red flag): Soccer Rally 2: World Championship, IceFlame’s free content update to acclaimed car-soccer app Soccer Rally 2, is available now on mobile devices. Just in time for the global soccer phenomenon, World Championship lets players choose their nation and progress through a tournament that will test their automotive soccer skills on a global level. To get in on the action, just download Soccer Rally 2 with the World Championship update, free on the iTunes App Store or Google Play (vuvuzela sold separately).

World Championship lets players take the wheel of the tricked-out, soccer-ready vehicles they drove to victory in Soccer Rally 2 – but this time, the stakes are even higher: all the bumper-slamming, rubber-burning mayhem takes place on a global stage. In the single-player campaign, players compete in a tournament against rival nations whose skill levels are determined by their actual current world standings. Players can also take up arms against old rivals (or make some new ones!) in World Championship’s multiplayer mode, which shines in head-to-head play on a single tablet.

The perfect game for any soccer aficionados swept up in global football fervor, Soccer Rally 2: World Championship is available now. Patriotic players seeking a jingoistic joyride can download it today, free on iOS or Android.

For more details, check out the Soccer Rally 2 website, or watch the trailer here.

You can find more info on the Soccer Rally 2 website. 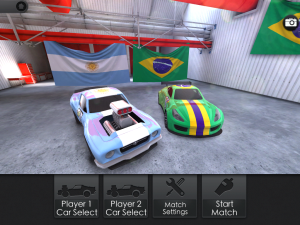 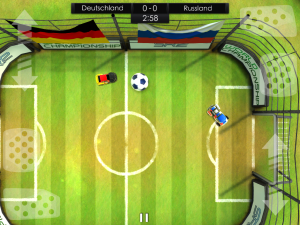