LOS ANGELES – August 6, 2015 – Nacho Games today announced the official Early Access launch of Burstfire, a high-stakes multiplayer shooter that pits teams of five against each other in deadly tactical assault matches. Burstfire rewards planning and teamwork over run-and-gun gameplay, and is designed for short, intense game sessions perfect for casual and hardcore FPS fans alike. Burstfire is playable today on Steam and www.burstfiregame.com.

Burstfire tasks players with attacking or defending a piece of encoded intel that spawns in the defender’s base. Each game begins with a non-combat planning phase, in which defenders fortify their stronghold with tricks and traps and attackers use remote-controlled probes to case the joint. When it’s time to attack, players can customize their entire loadout to ensure that they’re equipped to suit any playstyle: without the restriction of locked-in classes, no match ever plays the same.

The game aspires for realism, which means no respawns or health regeneration. The result is tense, drawn-out firefights where positioning and spatial awareness reign supreme. After death, players can either watch the rest of the match or jump back into the queue for another round.

The Early Access launch gives fans the opportunity to participate in the ongoing development of the game, provide crucial feedback, and jump in to the action immediately. You can pick up Burstfire today on Steam Early Access or directly at www.burstfiregame.com.

Get a glimpse of the action in the launch trailer here.

Founded in 2014, Nacho Games is an independent game studio based in Los Angeles. The team is composed of several former members of Adhesive Games, the studio behind online PvP mech combat simulator HAWKEN, and is led by Adhesive co-founder and lead game designer Dave Nguyen. Nacho Games is applying the lessons they learned building HAWKEN to their first game, Burstfire, a high-stakes tactical FPS that rewards careful planning over run-and-gun chaos.

Founded in 2014 as a publishing arm of Arktos Entertainment Group, Free Reign is a PC games developer and publishing partner dedicated to creating immersive worlds and games heavily influenced by their community. The studio creates original IP, specializing in developing massive online games. 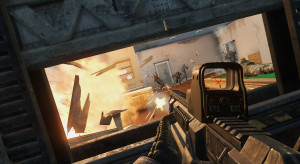