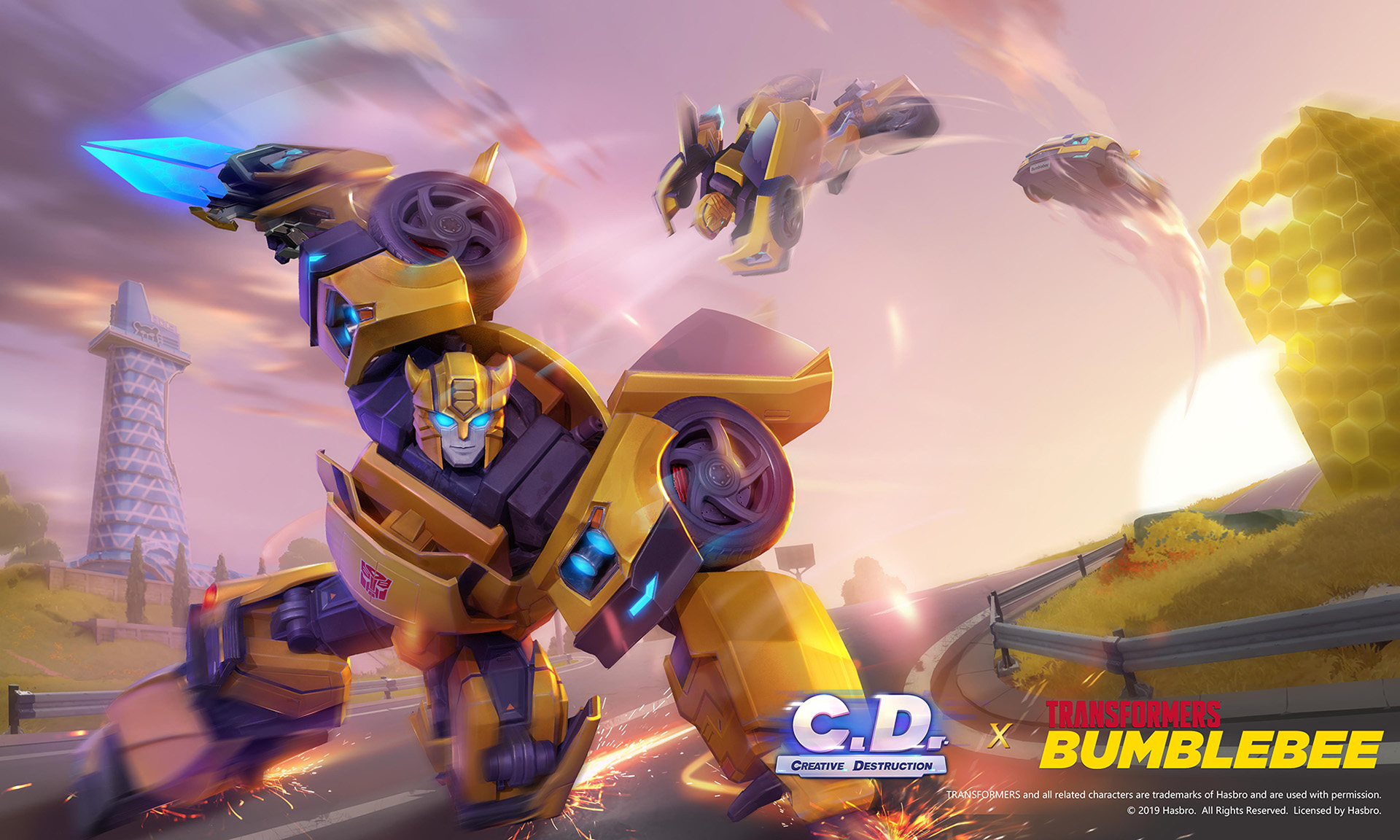 GUANGZHOU, China – Mar. 21, 2019 – Titan Studio today announced that it is working with Hasbro, Inc (NASDAQ: HAS) regarding its sandbox survival mobile game, Creative Destruction, to host a special in-game event featuring BUMBLEBEE from the TRANSFORMERS franchise from March 28 to April 28.  For a limited time, players will be able to play as BUMBLEBEE and in the Creative Destruction arena.

Creative Destruction will thrust players into a new game mode featuring BUMBLEBEE, where smash-n’-shoot skirmish gameplay has been fused with exciting robot battling and vehicle racing. Players will be able to take on this new game mode with exciting car chases, and win BUMBLEBEE Garage Kit sets, as well as special BUMBLEBEE skins and in-game diamonds. The more new friends a player invites, the better the rewards! In a video from Titan studio, viewers caught a glimpse of a silhouette of a BUMBLEBEE-like vehicle. Perhaps players will have a chance to get behind the wheel of this mysterious car themselves. Either way, Creative Destruction players will certainly be in for some energon fueled, high-octane fun with the upcoming update!

Download it today to get in on the action:

The game, previously in beta under Titan Studio, earned over 35 million downloads worldwide in its first week following initial release. Featuring a myriad of game modes and styles in a sandbox, battle royale format, Creative Destruction features a massive 4x4km map where everything is fully destructible. Players must break, build, and defend in order to survive the 100 player deathmatch that destroys the very battleground around you. Create and customize your own battleground via a unique workshop system and custom unlockable weapons. Players can also put them to the test in game modes including TPS, FPS, and various limited time modes such as Soccer and Warmobile. Team up or go at it alone in this all-out brawl for victory on this giant HD map.

TRANSFORMERS and all related characters are trademarks of Hasbro and are used with permission. © 2019 Hasbro. All Rights Reserved. Licensed by Hasbro.

About Hasbro
Hasbro (NASDAQ: HAS) is a global play and entertainment company committed to Creating the World’s Best Play Experiences. From toys and games to television, movies, digital gaming and consumer products, Hasbro offers a variety of ways for audiences to experience its iconic brands, including NERF, MY LITTLE PONY, TRANSFORMERS, PLAY-DOH, MONOPOLY, BABY ALIVE and MAGIC: THE GATHERING, as well as premier partner brands. Through its entertainment labels, Allspark Pictures and Allspark Animation, the Company is building its brands globally through great storytelling and content on all screens. Hasbro is committed to making the world a better place for children and their families through corporate social responsibility and philanthropy. Hasbro ranked No. 5 on the 2018 100 Best Corporate Citizens list by CR Magazine, and has been named one of the World’s Most Ethical Companies® by Ethisphere Institute for the past eight years. Learn more at www.hasbro.com, and follow us on Twitter (@Hasbro) and Instagram (@Hasbro).