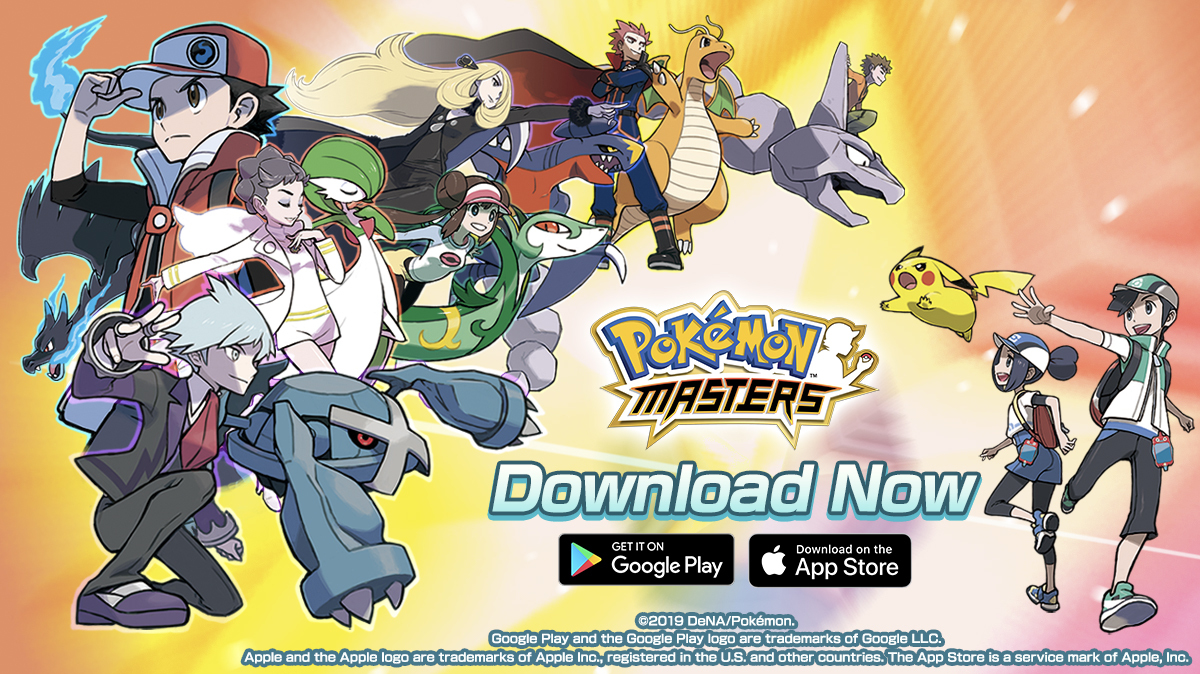 Pokémon Strategy and Battling Game Now Available to Download, with Special In-Game Events and Rewards Available for a Limited Time

Pokémon Masters is a strategy and battling game where players form teams of sync pairs (the combination of a Trainer and their partner Pokémon) to engage in 3-on-3 real-time battles against AI opponents. With 65 sync pairs to recruit at launch, players can team up with iconic duos such as Korrina & Lucario, Brendan & Treecko, Clair & Kindra, and many more. The game takes place in an all-new location, the island of Pasio, where Trainers and their partner Pokémon from every known Pokémon region have gathered to compete.

The 3-on-3, real-time battle mechanic in Pokémon Masters is a novel twist on Pokémon battles. Players will be able to release a barrage of moves while their AI opponent unleashes attacks at the same time. Each move requires a certain amount of the player’s move gauge, which will continuously refill during the course of battle. The battle is over once a player defeats their AI opponent’s team of sync pairs. Players will need to form their team, ration their move gauge, and strategically deploy the best moves at the most opportune times to ensure victory.

Pokémon Masters features both single player and cooperative play modes. In cooperative play, players can join two other players from around the world to battle a team of AI opponents.

In celebration of the launch of Pokémon Masters, special in-game events and rewards will also be available for a limited time. A story event featuring Blue, the iconic Pokémon Trainer from the Kanto region, will be available from September 2nd through September 29th, and allow players to team up with Blue and his Pokémon partner Pidgeot to battle other Trainers from the Kanto region to earn special rewards.

Players will also be able to earn up to 3,000 gems, which can be used to add new sync pairs to your team and is enough for 10 sync pair scouts, and other in-game items for a limited time by opening the game for the first time, logging in each day for up to 10 days, and participating in launch celebration missions.

More details about these special in-game events and rewards are described in the debut episode of Pokémon Masters News(https://youtu.be/ihJ0dcP1WuY), which features Yu Sasaki, Pokémon Masters lead producer at DeNA,  discussing the latest information on the game.

Pokémon Masters is a free-to-start game with in-app purchases on compatible Android and iOS devices. The game is available in English, French, German, Italian, Japanese, Korean, Spanish, and Traditional Chinese. Fans can learn more about Pokémon Masters at https://pokemonmasters-game.com/en-US.

All assets, including a fact sheet containing game information and a list of sync pairs announced to date, can be downloaded here: https://we.tl/t-sEJsBDdxbK

DeNA (pronounced “D-N-A”) develops and operates a broad range of mobile and online services including games, e-commerce, entertainment, healthcare, automotive and other diversified offerings. Founded in 1999, DeNA is headquartered in Tokyo with over 2,000 employees. DeNA’s aim is to delight and impact the world through the use of the internet and AI. DeNA Co., Ltd. is listed on the Tokyo Stock Exchange (2432). For more information, visit: dena.com/intl/.

The Pokémon Company International, a subsidiary of The Pokémon Company in Japan, manages the property outside of Asia and is responsible for brand management, licensing and marketing, the Pokémon Trading Card Game, the animated TV series, home entertainment, and the official Pokémon website. Pokémon was launched in Japan in 1996 and today is one of the most popular children’s entertainment properties in the world. For more information, visit www.pokemon.com.