Leading mobile game developer teams up with Amazon to bring another beloved title to Android, following the highly successful launch of Diner Dash

SAN FRANCISCO – Dec. 17, 2012 – PlayFirst® Inc. a global leader in mobile games for family and friends, today announced the continuation of its strategic collaboration with Amazon to bring Cooking Dash® to Android for the first time, launching today with an exclusive debut on Kindle Fire tablets.

Cooking Dash is the second game in PlayFirst’s mega-hit DASH® franchise to release on Android, following closely on the heels of Diner Dash®, which quickly became the No. 3 app in the Amazon Appstore for Android after launching in October. Praised by over 900 consumers, Diner Dash currently has a 4.5 star average review rating.

“We’re looking forward to welcoming millions of new fans to the PlayFirst family with Cooking Dash on Kindle Fire,” said Marco DeMiroz, president and CEO, PlayFirst. “We were thrilled with the overwhelmingly positive response to Diner Dash coming to Android, and by teaming with Amazon we continue to bring our beloved mobile games to Amazon’s vast audience.”

PlayFirst’s ongoing collaboration with Amazon bolsters its leadership in the fast-paced mobile gaming market, as tablets like Kindle Fire play an increasing role in family entertainment. Always looking to deliver fun mobile games to as many fans as possible, PlayFirst will continue to extend its game portfolio on Kindle Fire following today’s launch.

About Cooking Dash
Cooking Dash follows the adventures of Diner Dash starlet Flo as she leaves behind her desk job to run a boot-strapped restaurant, this time from behind the counter. Offering another spin on the groundbreaking time-management gameplay that made Diner Dash a global phenomenon, Cooking Dash tasks players with prepping everything from burgers and fries to sushi and dumplings. Tap and slide to seat customers, serve up hot dishes, and collect big tips! Players must help Flo keep DinerTown restaurants up and running… if they can stand the heat! 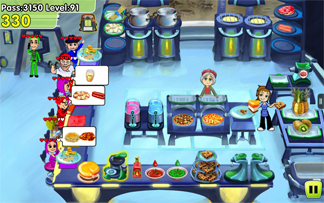 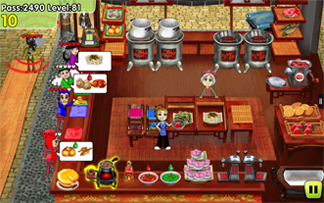