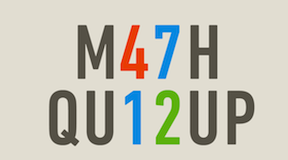 Plain Vanilla, developers of the QuizUp mobile platform, today announced the launch of Math QuizUp on Android devices. Previously available only on the App Store, the mobile game challenges players to speedily answer basic mathematical equations in order to move up in ranks and be crowned the top ‘mathlete’ for their country. With questions involving addition, subtraction, multiplication and division, Math QuizUp is an ideal tool for students or adults who want to hone up on their mental math.

Math QuizUp allows players to compete in real-time against other people around the world, across both iOs and Android devices. Each game consists of two players going head to head for a total of ten rounds, with questions gradually becoming more challenging as they win. The faster players answer each question correctly, the more points they win.

QuizUp is a first of its kind real time social trivia platform developed by Plain Vanilla. With QuizUp, Plain Vanilla can produce customized and high quality apps where users compete against each other around the world, and on any mobile device.