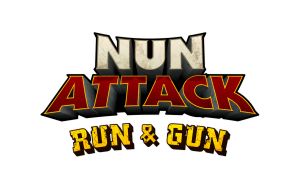 QUEBEC CITY – August 8, 2013 – Today Frima Studio has announced that the Nuns are on an all-new mission in the convent-ional, fast-paced Eternal Runner Nun Attack: Run & Gun. The Nuns haven’t shed their dirty habits! Rosy, Olga, Mandy and Eva are back with a smattering of Higher Power-ups and divine new abilities. Nun Attack: Run & Gun can be downloaded for free now on iOS and Android devices at:

“Our goal with Nun Attack was to make more than just a mobile game, we wanted to grow it into a brand people will begin to recognize full of characters people will want to see more of,” said Vincent Martel, IP Producer at Frima Studio. “With the launch of the second Nun Attack game today, we’re really seeing this dream come to life. We had such a great reaction from fans at PAX, people were submitting pictures of awesome cosplay and even humming the Nun Attack theme song! We’re really proud to have created something people enjoy and want to see more of.”

The Fallen Nun may have been defeated, but a new evil lurks beneath the heavens. Players will control one of four Nuns as they dash, shoot and slide through obstacles and monsters, including chainsaw-wielding skeletons and huge, heinous werewolves with the most badass weapons in this platforming, side-scrolling runner.