SAN FRANCISCO & LONDON – April 19, 2012 – SEGA® of America, Inc. and SEGA® Europe Ltd. today announced that Total War Battles: Shogun™ is now available on the Apple App Store. The latest addition to the award-winning Total War strategy series from The Creative Assembly, Total War Battles: Shogun is a re-imagining of Total War, not a PC port, and is a strategy game designed specifically for mobile platforms with a multi-touch interface.

Total War Battles: Shogun puts players in the role of a hot-headed young samurai who vows to avenge the death of his father. He embarks upon on a journey of conquest across medieval Japan, through over 15 hours of thrilling and unique tactical challenges.

Players will construct bases, train armies of Samurai, Warrior Monks and stealthy Ninja, marching them into battle against their foes. Alongside 27 core missions, there are also 18 challenging side-quests that generate extra experience points. Players can use these to upgrade their buildings and units, and gain the edge in future battles.

Total War Battles: Shogun also offers simultaneous multiplayer on the same device, pitting gamers against each other in fast-paced real-time battles that rely on bold moves and swift counter-strategies. Designed specifically for touch-screen devices, the game scales its appearance to provide the best experience on every supported device, and takes full advantage of iPad 3’s high-resolution Retina display.

About The Creative Assembly
Founded in 1987 and based in Horsham, West Sussex, The Creative Assembly is one of the UK’s most successful and established game studios. Creator of the multi award-winning Total War strategy series, the studio has received numerous press, industry and consumer accolades, including BAFTA and the Develop Industry Excellence awards. With nearly 200 highly talented developers and counting, the studio is expanding to embark on thrilling new triple-A console, PC and mobile projects. 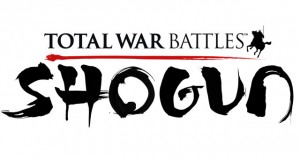