Sequel will bring cross-platform strategic multiplayer to Commanders-in-Chief everywhere, at any time

LONDON – July 10, 2012 – Rubicon Development today announced Great Big War Game, the follow-up to the immensely popular and award-winning Great Little War Game. The next chapter in the best-selling turn-based strategy game will appear on iOS and Android devices everywhere on July 18 for $2.99. A free Lite version and other platforms are coming soon. Great Big War Game includes a robust single-player campaign, along with a cross-platform multiplayer experience that will enable fans and newcomers alike to defeat their enemies and claim victory on the battlefield.

In Great Big War Game, players will take control of Jenkins as he fights to prevail in battle while receiving orders from the dimwitted Generalissimo. Gamers will take turns moving and attacking across the 3D hex-grid battlefield, using land, sea, and air units to defeat their foes, all while adjusting their strategy around ever-changing enemy movements. With 50 original levels spread across a cartoon-like world, and a tutorial for newer players, Great Big War Game mixes the best features of strategy board games and PC titles. For the first time in the series, added cross-platform multiplayer will enable players to seamlessly wage war across their iOS, Android and other devices. Battles play out asynchronously, so gamers can start a battle on one platform and finish it on another.

Rubicon Development has released a short preview trailer for the game. Start preparing a war strategy and check it out here: http://www.youtube.com/watch?v=ChyI-UWqy8Y

Check out the preview trailer for Great Big War Game at the following link: http://www.youtube.com/watch?v=ChyI-UWqy8Y 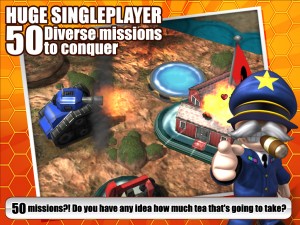 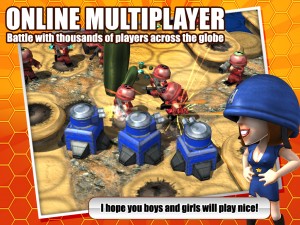 About Rubicon Development
Rubicon Development is a UK-based independent game developer founded by Paul Johnson and Steven Haggerty. After many successful years as a porting studio, they are now focused on digitally-distributed original games for mobile platforms. Their first release, “Great Little War Game” went straight to #1 on the iOS strategy game chart, with similar success for the Android build.