MONTREAL – August 14, 2012 – Minority Media, an independent game development studio, along with Sony Computer Entertainment America LLC (SCEA) today announced the official release of PlayStation®Network (PSN) exclusive puzzle-platformer Papo & Yo. As part of the second annual PSN PLAY promotion, this already award-winning adventure will be available for purchase with today’s scheduled PlayStation®Store Update for $14.99 ($11.99 for PS PLUS members), or from GameStop online at www.gamestop.com/ps3/games/papo-yo/103811.

To see the cinematic Papo & Yo launch trailer and learn how Quico’s adventure with Monster started, head to www.youtube.com/watch?v=1tjPWs96lk4.

“Over the past year, I’ve spent a lot of time talking about how wonderful it is that SCEA has helped me make such a personally-inspired game. Now that launch day is here, I hope everyone has a chance to play Papo & Yo and see this isn’t just a game about my childhood; our whole team has worked hard to create a fun, magical adventure that should speak to players everywhere, and I can’t wait to hear stories from those who experience it!” said Minority creative director Vander Caballero.

Papo & Yo features the unlikely duo of a young boy named Quico and a huge, mostly-friendly beast named Monster. Surprisingly, Monster’s most threatening feature is not his set of razor-sharp teeth, but his addiction to poisonous frogs. After devouring one, Monster catapults into a violent rampage from which no one, not even Quico, is safe. As Quico, players must navigate their way through a magical, puzzle-filled world to save their beastly pal from the biggest danger of all: himself.

To learn more about all the imaginative titles included in the 2012 PSN PLAY promotion, visit us.playstation.com/psnplay2012/.

For more information about Papo & Yo, visit www.weareminority.com/papo-yo/. 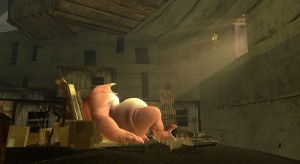