SAN FRANCISCO  – August 16, 2012 –  SEGA® of America Inc. is ringing in a new school year with great deals on hot downloadable titles! For a limited time, popular games like Sonic CD™ and Sonic the Hedgehog 4™ Episode II are available for up to 50 percent off the original price. As a thank you to the loyal fans, all players who spend more than $4.95 (iOS/Android) on Sega Mobile games and send in the receipt are eligible to win a smartphone. For more details about the sale, visit the SEGA blog. 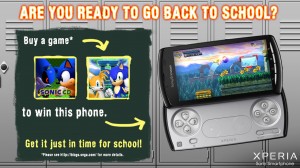