Thought the world was safe after 2012? Think again. A nuclear missile from an unknown source is about to hit land and it’s up to players to escape as far as they can before the explosion… or before their truck gets blown to pieces by zombies intent on ruining the party!

Today’s trailer showcases the super-charged and action-filled pace of the game, along with hilarious weapons such as the Shark Gun, Fart Bazooka, Twitgun and the terrifying Chicken Rain. We also get a glimpse of the colorful cast of survivors, who each provide different abilities in escape artistry to the mix, as well as wacky vehicles like the Catmobile and the disease-ridden Jolly Scurvy. Finally, the trailer reveals the location of the much-sought-after Weapon of Mass Destruction, i.e. George the cyborg T-Rex!

Nuclear Outrun for iOS is the enhanced remake of Nerdook’s 2012 Flash hit and is the second in a series of games to be released under Gamenauts’ Asian indie mobile publishing initiative.

It’s T-minus two weeks until the end of the world! Gear up and get ready to escape (or at least die trying) for free on July 18, 2013.

About Gamenauts
Gamenauts is a leading game publisher and developer of Mobile, PC and Social Networks games, founded in the San Francisco Bay Area with a mission to explore the frontiers of interactive fun. They struck gold with hit games like Ninja Fishing on mobile and the Cate West and Burger Rush series in the PC casual gaming space. Gamenauts invites players to join them on their voyage through the galaxies of games on multiple platforms. 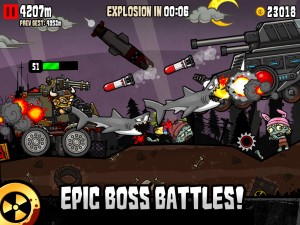