“The original Crazy Taxi made a big impact, and it was important for us to recapture the same thrills and enjoyment with Crazy Taxi: City Rush,” explained Kenji Kanno, Executive Producer and creator of SEGA’s Crazy Taxi franchise. “So much of the fun of Crazy Taxi is the moment-to-moment excitement of your current run – whether or not you’ll manage to execute that perfect turn or dodge through traffic to make a better fare and beat your best score. I’m very proud of how we’ve managed to bring that to mobile devices in City Rush.”

Drawing heavy inspiration from the original’s arcade racing roots and in keeping with the spirit of the iconic franchise, Crazy Taxi: City Rush features adrenaline-fueled missions, high-octane gameplay and campaigns that speed through a sprawling concrete jungle to unlock, explore, and master.

Crazy Taxi: City Rush is free to download from the App Store on iPhone, iPad and iPod touch or at www.AppStore.com. 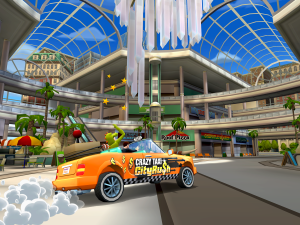 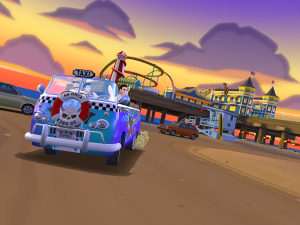 About SEGA Networks Inc:
SEGA Networks Inc. is a division of Tokyo, Japan-based SEGA. Corporation, focused on creating compelling entertainment for mobile and tablet devices. Since releasing Super Monkey Ball as the first number one game on the App Store in 2008, SEGA has been at the forefront of mobile gaming with over 85 games and over multiple hits with over a million downloads each. SEGA Networks Inc. publishes games featuring iconic SEGA IP as well as original content. The company is dedicated to offering stellar player experiences across all genres that are delivered with quality support and community. SEGA Networks Inc. includes acclaimed studios Three Rings and Hardlight Studios. Recent SEGA Networks Inc. titles include the hit Sonic Dash, Super Monkey Ball Bounce and the upcoming Crazy Taxi: City Rush. For more information, visit www.sega.com.

About Hardlight:
Based in the UK and founded in 2012, Hardlight is an internal development studio owned by SEGA® Corporation. Composed of a small, dedicated team with drive, passion and creativity, Hardlight focuses on making high-quality games for mobile devices. Hardlight is behind Sonic the Hedgehog™’s latest critically acclaimed adventures on mobile platforms: Sonic Jump™ and Sonic Dash™. For more information please visit: www.hardlightstudio.com.

©SEGA. All rights reserved. SEGA is registered in the US Patent and Trademark Office. SEGA and the SEGA logo are either registered trademarks or trademarks of SEGA Corporation.