END_OF_DOCUMENT_TOKEN_TO_BE_REPLACED

MONTREAL – Sept. 4, 2013 – Independent game development studio Red Barrels, founded by veterans from some of gaming’s biggest franchises, today announced that the highly anticipated survival horror game Outlast is now available on Steam. Frightening previewers since this year’s PAX East, where some attendees were so startled that they jumped through the booth, Outlast follows investigative journalist Miles Upshur as he explores Mount Massive Asylum with his trusty night-vision camera, hoping to break the story of his life. But his story – and his life – is quickly put in danger as he discovers a mystery that walks a terrifying line between science and religion, nature and something else entirely…

END_OF_DOCUMENT_TOKEN_TO_BE_REPLACED

Scottsdale, AZ– Aug. 22, 2013 – The Rich Dad Company, founded by personal finance expert Robert Kiyosaki, today announced Rich Dad Interactive, a digital-focused brand that will provide the always-online generation with new ways to learn financial literacy. Most well-known for Rich Dad Poor Dad, the top-selling personal finance book of all time, Rich Dad will bring the time-tested lessons that have helped millions find financial freedom to new audiences via apps, games and interactive learning tools. Rich Dad Interactive’s first product, Clutch, a new take on the e-book format with a focus on visual and interactive elements, is planned for release on the Apple App Store in September 2013.

END_OF_DOCUMENT_TOKEN_TO_BE_REPLACED 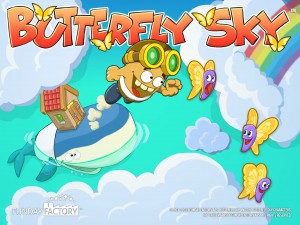 AARHUS, Denmark– August 8, 2013 – Today Danish game developer Funday Factory, the studio behind award-winning apps Axe in Face, Driftin’ and Smashville, today released Butterfly Sky on iOS. Time your jumps and landings using one-touch controls to collect butterflies in this addictive endless jumper. Collect and upgrade four handy power-ups while jumping across a cloud-filled sky. Upgrade your clothing, your house, and even your power-ups using your hard-earned butterflies. Plus, don’t forget to level up your character for bigger bonuses and score multipliers! This all-ages game provides butterfly collecting, cloud-hopping fun that will have you saying, “Okay… just one more round!”