PARIS – June 1, 2012 – Brain Candy, the high-fructose independent game developer from France, today released a new cinematic trailer for their upcoming simultaneous turn based strategy game, Fray. The trailer zooms in on combat as well as a release date of June 19, 2012. See it now on YouTube!

Players can soon enter the dystopian future of 2098 where Earth’s remaining resources are controlled by mega-corporations and a desperate humanity seeks refuge in virtual realms. In combat module Fray, players control a squad of 4 characters and fight in turns comprised of a definition phase and a resolution phase. Players give each member of their squad orders during the definition phase: shoot, move, deploy equipment, use personal bonuses or powerful team bonuses and then watch the results of their actions during the resolution phase: seeing how opponents strike back and who best anticipated and trapped the other teams.

Get in on the beta here: http://www.fray-game.com/en/other/join-beta/ 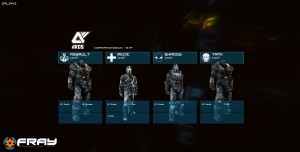