VANCOUVER­ – June 27, 2012 – Here’s the wind-up, and the pitch! Hothead Games steps up to the plate and hits a homerun! Feel the excitement of going for the Big Win in Big Win Baseball, the newest game from the Big Win Sports series, available today on the iTunes App Store and Google Play.

Get out of the stands and into the dugout and create your own unique dream team to compete against online opponents from around the world. Manage players by boosting their pitching, hitting and fielding skills then watch your team battle it out on the diamond and in the dust!

Aim to beat your opponents using Big Impact cards, and watch the game play out as your fans cheer you on to victory! Once you have mastered your team, get ready to compete against your friends in Friend’s Pennant mode, or take on the world in the Daily Pennant for the ultimate BIG WIN!

Big Win Baseball is available on iOS and Android now for FREE. Available for Kindle Fire and the Amazon App Store at the start of July.

About Hothead Games
Hothead Games, from Vancouver, British Columbia, is an independent developer and publisher of mobile games. Our studio has brought to life original titles such as, Zombie Ace, Scarface, Jaws Revenge and the Big Win Sports series. Partnering with other indie studios has allowed us to bring games like Braid and Machinarium to more platforms and new audiences. 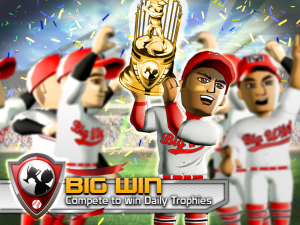