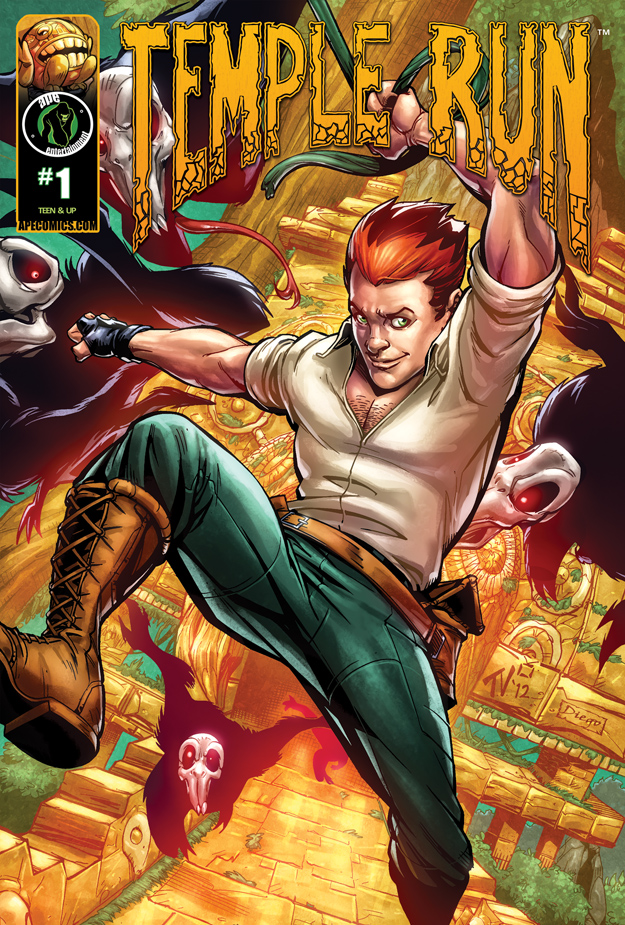 Ape Entertainment, in partnership with Imangi Studios and Dimension Brand Group (DBG), announced today that the Temple Run Comic App is now available for iPhone, iPad and iPod touch. Based on the self-titled smash-hit game, the Temple Run Comic App is $.99, which includes the first issue and, for a limited time, the second issue at no additional cost. Both action-packed issues are chocked full of adventure, suspense, and ancient mystery.

What are the temples? What are the secrets of the golden idols? What exactly are the demon monkey creatures? All these secrets and more are revealed as the Temple Run world comes to life. Fans begin the adventure with Guy Dangerous as he and a band of adventurers go in search of a lost Incan city and the treasure it holds. But when Guy comes face to face with a mysterious golden idol, they may get more than they bargained for.

Issue No. 2 begins after Guy Dangerous and a group of explorers discovers a lost Incan city and, hidden deep inside, a mysterious golden idol while searching for a missing archeologist. The moment Guy touches the idol, they are transported to an ancient temple in a mysterious land … and they’re not alone. Now Guy and his fellow adventurers must race to escape the deadly traps and hordes of ravenous demon monkeys they encounter at every turn. Can Guy and his friends survive long enough to get home? Or better yet, will they survive at all?

A full-color comic book series is available in print as well at local comic shops.

“We had an exciting opportunity to expand the Temple Run universe with the new comic app, and couldn’t wait to share it with our fans,” said Keith Shepherd, co-found of Imangi Studios. “We are looking forward to adding even more depth to the story with Guy Dangerous and his many adventures to come.”

Created by Imangi Studios, Temple Run® is the most exhilarating running game on the App Store. Players test their reflexes as they race down ancient temple walls and along sheer cliffs. They swipe to turn, jump and slide to avoid obstacles, collect coins to buy power ups, and run as far as they can through an ever more challenging terrain.

You can download a Temple Run press kit here.

Imangi Studios was founded by husband and wife team Keith Shepherd and NataliaLuckyanova in 2008. With the addition of artist Kiril Tchangov in 2009, the three person studio developed mega-hit Temple Run, which currently boasts over 125 million downloads since its release in August 2011. They also released the game Temple Run: Brave in partnership with Disney/Pixar, the perfect adaptation of the original game and the Disney/Pixae movie Brave. It quickly achieved worldwide success, hitting No. 1 in 49 countries and remaining in the top 2 of all paid apps for the first month of release. Based in Raleigh, NC, the self-funded, fully independent studio previously developed Harbor Master, geoSpark, Hippo High Dive and Max Adventure for IOS. Temple Run launched in the Android Marketplace in 2012.
Official Website | Facebook | @TempleRun