SAN JOSE, Calif. – July 18, 2013 – Gamenauts, in conjunction with developers Nerdook Productions and Nightspade, today announced the launch of their absurdly awesome apocalyptic game, Nuclear Outrun. They’d like to remind players that one of the many ways to get away from a world-ending nuclear missile while mowing down zombies is to load up a fart bazooka, read a Book of Rapture, and drive away in a 600 horsepower ice cream truck. Nuclear Outrun is now free in the App Store: http://itunes.apple.com/app/nuclear-outrun/id588934383

See the endless getaway possibilities in the trailer: http://youtu.be/wsx5vpPdjlo

Unlike most games about Armageddon, which strive for realism by skimping on vehicles and bullets, Nuclear Outrun is over equipping players for the end of the world. Players will find a large arsenal of weapons like the Shark Gun, Twitgun, and even a good ol’ fashioned flamethrower. Unlike most doomsdays, players will find a grand variety of survivors, who are each escape artists in their own right (hipsters can indeed be of help when running away from zombies), as well as more wacky vehicles than any garage can fit. The game is also announcing that Weapon of Mass Destruction do indeed exist…in the form of George the cyborg T-Rex.

Grab Nuclear Outrun from the App Store before the world ends today! http://itunes.apple.com/app/nuclear-outrun/id588934383 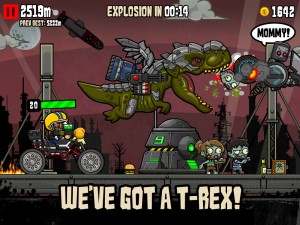