Joust your friends among the stars, exclusively on OUYA

SANTA MONICA, Calif. – Mar. 12 2014 – LAZA KNITEZ!!, an award-winning local multiplayer game from Copenhagen-based independent developer Glitchnap, is available now, only on OUYA. Bringing together the best of medieval badassery and far-future sci-fi awesomeness, LAZA KNITEZ!! puts players on the spacesteeds of four ultranoble space warriorz to take to the battlefield in a TechnoJoust to End All TechnoJousts.

LAZA KNITEZ!! is a fast-paced, minimalist deathmatch game that has charmed and entertained fans since its conception in 2012. Winner of the Indie Sensation award at the 2012 Nordic Game Conference, the game is now finally available to the general public, for free, on the OUYA store. For a first-hand look at what gameplay is like, swing by the OUYA booth at GDC, where the developers at Glitchnap will be personally demoing the title.

If you’ve ever wanted to unhorse your friend via laser-cannon in the depths of hyperspace, check out the launch trailer and head over to the OUYA store and download LAZA KNITEZ!! for free today!

Any media interested in learning more about LAZA KNITEZ!!, speaking with the developers, or reviewing the game can contact TriplePoint PR at ouya@triplepointpr.com or 415.955.8500. 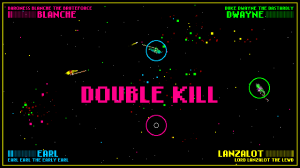 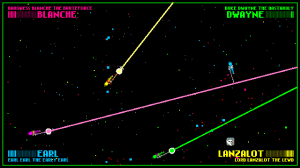