VANCOUVER – June 2, 2015 – Switchblade Monkeys is back in the saddle: the independent studio that brought the stylized Wild West-inspired isometric shoot-em-up Secret Ponchos to PS4 in 2014 has embarked on an ambitious content update program for the title’s Steam Early Access build. Once a week for twelve weeks building up to their summer launch, Switchblade Monkeys will release major content updates, including new game modes, never-before-seen characters, tweaked and enhanced game mechanics, and more. You can get a preview of what’s to come in the 12 Weeks ‘Till Showdown trailer: https://www.youtube.com/watch?v=vzoGgNmC4R4.

“We’re incredibly proud of Secret Ponchos on PS4, but it has also been a learning experience for us,” said developer Yousuf Mapara. “Rather than simply porting a clone of the PS4 version onto PC, we wanted to take use this opportunity to take what our community has taught us and act on it: to expand the game’s capabilities, flesh out our game world, and give our PC community something that can feel truly theirs.”

The program kicks off with a character update that introduces Gordo to PC, a bloodthirsty bandit built like a tank and with the firepower to match. This trigger-happy terror wields an enormous gatling gun with an unrivaled fire rate and a Molotov cocktail capable of reducing his foes to ash. Gordo was playable as paid DLC on the PS4 build, but as of today he is freely available for all Early Access players. You can see Gordo in action in the studio’s first ever Lonetree Most Wanted character feature: https://www.youtube.com/watch?v=jTvzE6Oie-I.

In addition to the new character, Switchblade Monkeys will patch in a 3v3 Game Mode for intense three-on-three combat. To expedite the match-making process for their community of quick-drawing sharpshooters, the team has rebuilt the matchmaking system with a Mode Prioritization feature, Quickmatch, and a system that seeks out and merges parallel lobbies. To find out what else is in store for the weeks to come, or to tell the team what you’d like to see in an update, stay tuned on the company blog.

To get into the cutthroat spirit of the dog-eat-dog, man-shoot-man town of Lonetree, each player’s win/loss ratios will be chronicled on the Season Zero Leaderboard, an Early Access-exclusive period of competitive play that will run from June 9th until the game’s official launch. At the end of the season, the game’s top duelists will be awarded with badges and prizes that celebrate their gun-slinging prowess.

Every Saturday at 10:30 am PST, the Switchblade Monkeys team will take up arms against their playerbase on Twitch – and they’re not shooting blanks. Join the fun at http://www.twitch.tv/secretponchos.

To find out if you’ve got the fastest hands in the West, purchase Secret Ponchos on Steam Early Access for $14.99.

Switchblade Monkeys Entertainment is a 12-person independent studio based in Vancouver that is dedicated to producing high-quality, dynamic, and visually distinctive multiplayer content. Their debut title, Secret Ponchos, launched on PlayStation 4 in 2014, and is the first game to receive support from Execution Labs’ Finishing Fund. 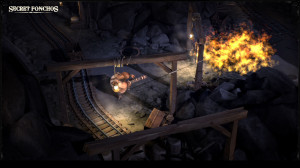 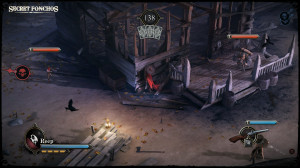