PARIS – Nov. 13, 2012 – Brain Candy, the high fructose independent game developer of 10 members from France, proudly announces the re-launch of their simultaneous turn based strategy game, Fray, titled Fray: Reloaded Edition, on Steam. Not only does Fray: Reloaded Edition include RAM optimization, better server stability, and punishment for rage quitters, existing players will be rewarded with a free game key to share with a friend. Existing and new players will also receive a free soundtrack as a thank you from Brain Candy.

After the release of Fray on Steam in June 2012, Brain Candy has been working hard with the help of player feedback to make sure their very first game is perfected! Today, Brain Candy is proud to announce the following improvements featured in Fray: Reloaded Edition.

About Fray
Fray combines the strategic thinking of real-time strategy games with the fast-paced action of shooters to create a new and unique hybrid game unlike any other. In Fray, players pledge allegiance to one of three mega-corporations and control a squad of four characters to face off against other corporations’ squads. Fights happen in turns and are comprised of a definition phase and a resolution phase. Players give each member of their squad orders during the definition phase: shoot, move, deploy equipment, use personal bonuses or powerful team bonuses and then watch the results of their actions during the resolution phase: seeing how opponents strike back and who best anticipated and trapped the other teams. In Fray, game over spells death in real life! For more information, check out Fray’s official website: www.fray-game.com 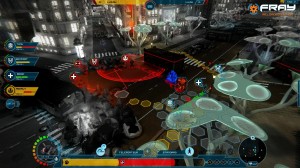