Get Crushin’ Robots – NYC, complete with brand-new content, for FREE from the App Store at https://itunes.apple.com/us/app/crushin-robots-nyc/  id568075534?ls=1&mt=8

The game now features three new robots for added pandemonium, two new weapons to arm you in battle, an in-game task system, a new barge power-up that protects robots against heavy fire, and a skip stage for players to move to either the last completed stage or two earlier stages. With today’s update, the fight to reclaim the Big Apple has more bolt-busting mayhem than ever before. Furthering the fun around the globe, Crushin’ Robots ­– NYC is now available in Italian, Russian, Turkish, Brazilian Portuguese, and Korean. 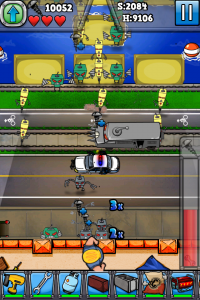 Falling Objects is the brainchild of founder and CEO Joe Zito, a veteran of the film and television industry now dedicated to producing action-packed mobile games. Their debut game, Crushin’ Robots – NYC, is the first in a planned series of titles featuring epic robot battles around the world.
Official Website |  Facebook | @CrushinRobots