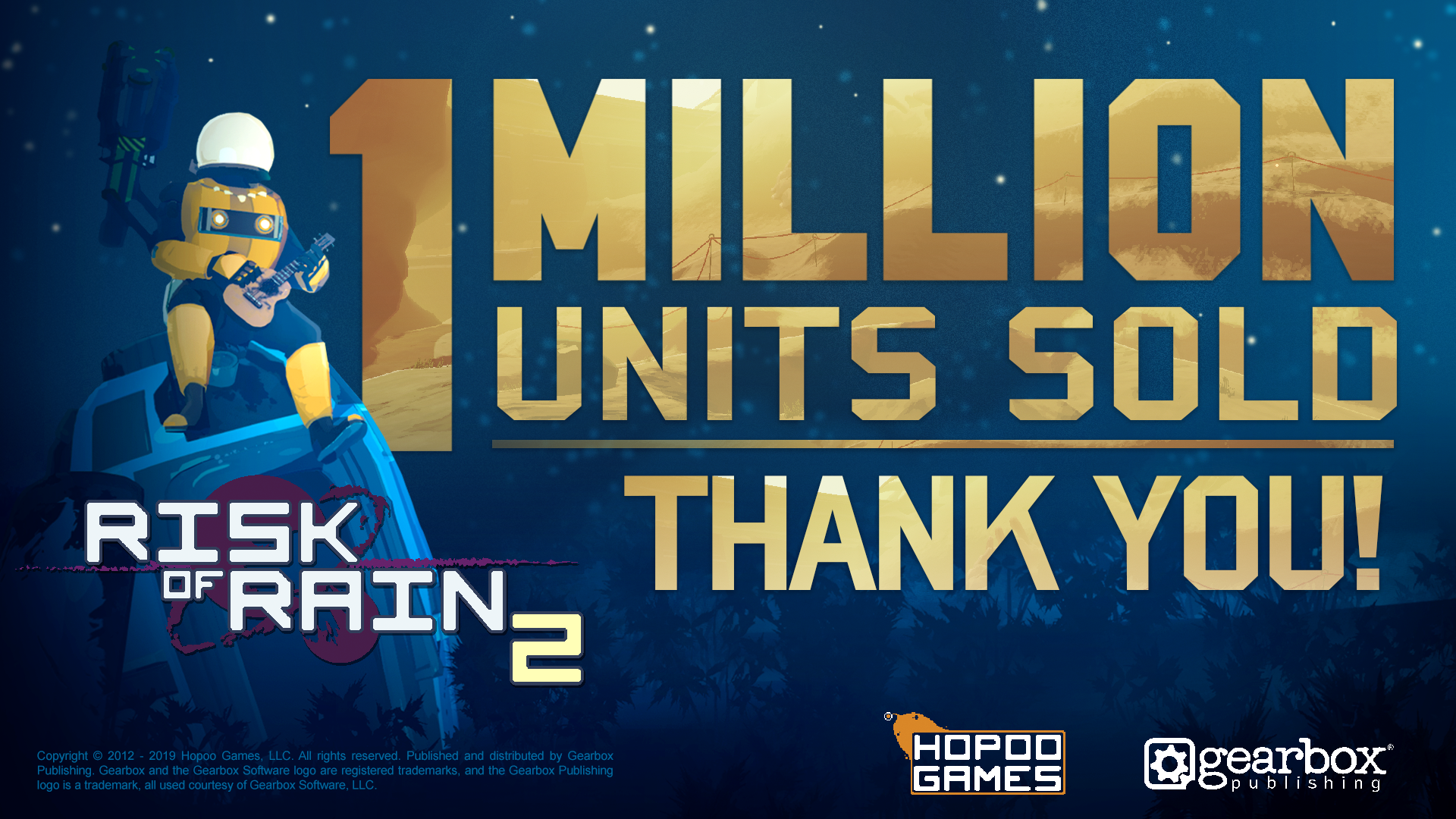 A Deluge of Players Flood the Co-Op Roguelike Shooter

FRISCO, Texas – May 3, 2019 – Hopoo Games and Gearbox Publishing today announced that Risk of Rain 2, its new third-person roguelike shooter, has sold over one million units in the month following its launch into Steam Early Access on March 28, 2019. This significant milestone comes hot on the heels of the Risk of Rain 2 early access forecast reveal, which detailed content players can expect leading up to launch next Spring.

“First off, we are beyond excited to announce that Risk of Rain 2 has surpassed one million sales on Steam alone in the month following our Early Access launch!” said Paul Morse and Duncan Drummond of Hopoo Games. “To give you guys a little bit of context, it took us almost five years to hit that same number on Steam for Risk of Rain 1. We are so excited to see how many of you are jumping into RoR 2 and bringing your friends with you, thank you all so much.”

The sequel to the beloved indie hit, Risk of Rain 2 brings 3D graphics and third-person shooter mechanics to the franchise while holding true to its roguelike roots. Risk of Rain 2 is available on Steam in early access for $19.99 and slated to launch in Spring 2020. Download it today here: https://store.steampowered.com/app/632360/Risk_of_Rain_2/

A small team who started out as two students from the University of Washington, Hopoo Games made their mark with the award-winning indie success, Risk of Rain in 2013, followed by Deadbolt in 2016. Now a team of indie veterans, they’ve been hard at work on a hotly anticipated sequel to Risk of Rain featuring 3D graphics and third person shooter mechanics. Learn more at http://hopoogames.com/.

Founded in 2016, Gearbox Publishing was established with the goal of helping developers around the world bring their products to market while retaining their unique creative visions. The mission began with the critically-acclaimed Homeworld Remastered Collection for PC, and have since been followed by many partnerships that include Epic’s Fortnite, tinyBuild’s Hello Neighbor, and Compulsion Games’ We Happy Few. Gearbox Publishing continues to remain committed to its mission to entertain the world and become the most developer-friendly publisher in the industry. Learn more at http://www.gearboxpublishing.com.