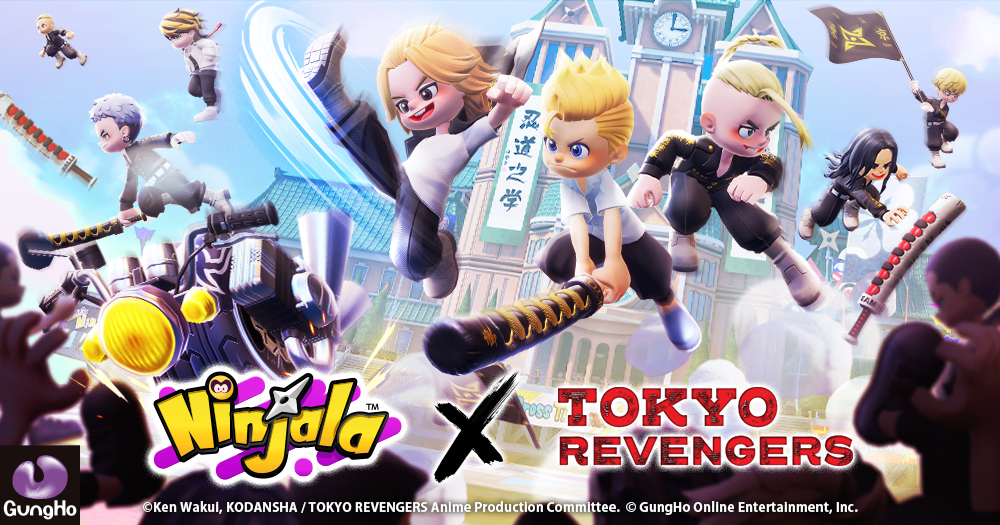 TOKYO, Japan – July 20, 2021 – The teenage delinquents of Tokyo have arrived on Ninjala‘s turf as GungHo Online Entertainment’s gum-based ninja action game kicks off a collaboration with the hit anime and manga series Tokyo Revengers. Now through August 24, players can show their mettle and earn swag worthy of the Tokyo Manji gang. All players who log in during this time will receive three collaboration IPPON Gums.

Prove your worth as a delinquent with activities and items based on the hit time-traveling crime thriller shonen. Pick up cool outfits and accessories in the Shinobi Shop, test your luck with the Gumball Machine, and participate in challenges for gangster-themed goodies like:

Don the black Toman jacket like the show’s iconic teen gangsters, with outfits based on…

Other outfits are available during the collaboration, including an additional costume for Ken Ryuguji (Tokkofuku/Uniform) and a Manjiro Sano outfit. Players can also earn special outfits by winning Featured Battles between July 22 and August 24 to dress like Haruki Hayashida. One battle earns “Haruki Hayashida Hair,” and three wins in a row will reward players with the associated Haruki Hayashida outfit.

Impress your friends and show your style with Manjiro “Mikey” Sano and Kazutora Hanemiya outfits, offered exclusively through the Gumball Machine. Mikey will be available during the entire collaboration, but Kazutora will only hit the mean streets beginning August 10.

Get Ready for Total War

It takes more than just your fists to settle the score with Walhalla. Get new event-exclusive Ninja-Gums based on the weapons from the show, including:

Rise through the ranks to become Captain of the First Division by competing in the Tokyo Revengers Cup on August 20. All players that compete get a collab sticker, but only the best fighters will win a limited edition IPPON Decoration and Emote.

Ninjala is an online Ninja-Gum action game featuring a colorful cast of ninjas who battle it out in action-packed clashes while free-running across dynamic environments. These young descendants of ancient ninja clans wield a variety of special items and abilities, highlighted by the use of distinctive “Ninja-Gum” weapons. Check out the trailer here.

Press assets can be found here.

Trademarks are property of their respective owners. Nintendo Switch is a trademark of Nintendo.

TriplePoint on behalf of GOEA