END_OF_DOCUMENT_TOKEN_TO_BE_REPLACED

SAN FRANCISCO – Oct. 24, 2013 – What happens to a Pygmy that thinks it can fly? Inevitably, it falls. But in the world of Pocket God, it’s just as likely to be sliced in two by spinning blades, have its skin peeled off by a monkey, or suffocate in a pile of giant dodo droppings. Bolt Creative, the studio behind the classic App Store hit Pocket God, has today announced that Pocket God: Ooga Jump will hit the App Store for $0.99 on Thursday, October 31st. END_OF_DOCUMENT_TOKEN_TO_BE_REPLACED

MONTREAL and DUBLIN – October 18, 2013 – Superhippo gives buccaneers and aspiring sea captains a new reason to set sail, announcing today that Pirate Legends is available for free on iOS devices! Traverse the Seven Seas as you fend off attacks from the British navy, cannibal tribes and even the undead!

For a limited time, download Pirate Legends for free  on the iTunes App Store: https://itunes.apple.com/us/app/pirate-legends-td/id626884809?mt=8

END_OF_DOCUMENT_TOKEN_TO_BE_REPLACED

SAN FRANCISCO – Sept. 13, 2013 – Leading mobile game developer PlayFirst, in cooperation with Sony Pictures Consumer Products, today revealed that the official Cloudy with a Chance of Meatballs 2 mobile game will be available for download on September 19. The arcade puzzle-match app will feature adorable foodimals—food-animal hybrids that now inhabit the island of Swallow Falls, as well as the brainy inventor Flint Lockwood—hero of the film series—and his friends Steve the Monkey and Sam Sparks. More than a week ahead of the movie’s September 27 debut, casual game players and franchise fans can get a taste of the game for free on iPhone, iPad, iPod touch and Google Play™.

In Cloudy with a Chance of Meatballs 2, players must save as many foodimals as possible, freeing Barry the Strawberry, Cheespiders, Fruit Cockatiels and more fresh friends! To rescue the comestible characters, players chain and match foodimals in fast-paced, timed intervals, completing challenging goals and earning stars to progress through the edible island.

To learn more about Cloudy with a Chance of Meatballs 2 for mobile devices, visit http://bit.ly/cloudy-game

Assets
To check out the first screenshots and character portraits for the mobile game, download the press kit: triplepointpr.com/dl/PlayFirst/Cloudy2/Cloudy_Announce_913.zip

Google Play is a trademark of Google, Inc. 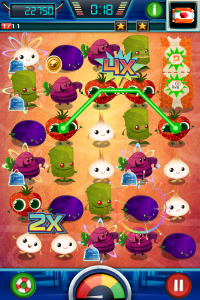 More than two million fans who have already purchased the game will receive the new gameplay update, which also includes two original co-op maps, completely free. Newcomers to Bloons® TD 5 can download the game today for only $2.99 on the App Store at: https://itunes.apple.com/us/app/bloons-td-5/id563718995?mt=8.

END_OF_DOCUMENT_TOKEN_TO_BE_REPLACED

In an effort to let LIMBO reach as many devices as possible, Playdead is now ready to deliver a seamless touch-based experience on the iPad 2 (and higher), iPad Mini, iPhone 4S (and higher), and the latest generation of iPod Touch. END_OF_DOCUMENT_TOKEN_TO_BE_REPLACED