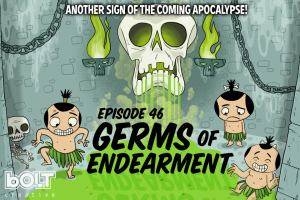 SAN FRANCISCO – September 26, 2012 – Attention all passengers headed for Apocalypse Island, an urgent travel advisory has been issued. Due to a deadly plague of biblical proportions running its course through all of Pygmy-kind (released into the wild today by Bolt Creative in Pocket God Episode 46: Germs of Endearment), we strongly urge you to be considerate and cover your mouth while passing away into the afterlife in order to prevent further spreading of this malicious ailment. Also of grave importance, please stay away from the new—and aptly named—Plague Room, as the water contained in the fountain within this chamber is infected with the virulent disease. END_OF_DOCUMENT_TOKEN_TO_BE_REPLACED

MONTEVIDEO, Uruguay – September 13, 2012 – Mobile developer Powerful Robot Games today announced the launch of Space Holiday on the iTunes App Store. In development since 2007, Space Holiday blends line-drawing and puzzle solving into a space-age adventure. With fun, cartoony artwork and simple touch controls, Space Holiday is a perfect pick-up-and-play game for puzzle fans and casual gamers of all ages. Download Space Holiday today on the App Store for $0.99 on iPhone and $1.99 on iPad, or sample the free version. END_OF_DOCUMENT_TOKEN_TO_BE_REPLACED

MEXICO CITY – September 6, 2012 –  Televisa Home Entertainment and Efecto Studios have announced the release of Grabbity, a new puzzle-platforming game with 360 degrees of control, for iOS devices. Grabbity, which puts players in control of a heroic Grabbian on a quest to save his planet, is available now, for free, for the iPhone, iPad, and iPod touch. Players can download the game and challenge all 80 levels of Grabbity’s world, where gravity is only a temporary state. END_OF_DOCUMENT_TOKEN_TO_BE_REPLACED

LONDON – September 4, 2012 – Mobile developer Rubicon Development today announced the first major update for their hit mobile title, Great Big War Game, in addition to launching the game on the Steam platform for PC. A sequel to their iOS hit Great Little War Game, Great Big War Game delivers casual strategy gaming with over 40 hours of gameplay in the single player campaign alone. Today’s update will bring nine new multiplayer maps for players to battle on, adding even more variety to the turn-based warfare. A new “novice mode” is also being introduced, where players will be able to play without the fog of war obscuring their view of the battlefield. Great Big War Game is available now on the App Store for $2.99 and on Steam for $9.99. END_OF_DOCUMENT_TOKEN_TO_BE_REPLACED

END_OF_DOCUMENT_TOKEN_TO_BE_REPLACED

MEXICO CITY – August 22, 2012 – Televisa Home Entertainment and Efecto Studios, Colombian-based makers of hit mobile games, today announced Grabbity, a new game with 360 degrees of mind-bending action and exploration unlike anything on mobile devices. As the latest addition to the Platformer genre, Grabbity will launch for free on iOS devices worldwide on September 6. With the ability to bound, leap, and fall through extensive environments using touch controls, Grabbity offers 80 levels of over-the-top action where the laws of gravity are broken and creativity takes over. END_OF_DOCUMENT_TOKEN_TO_BE_REPLACED

New Infinite Runner from the Creators of geoDefense and Tiny Heroes

ST. LOUIS, Mo. – August 14, 2012 – Simutronics today announced One Epic Knight, a new game from the creators of the immensely popular and award-winning Tiny Heroes. A fresh addition to the free running genre, One Epic Knight will launch for free on iOS devices everywhere August 23. With simple controls, numerous upgrades, and addicting gameplay, One Epic Knight will take fans of free-runners to a level of epicness they never thought possible. END_OF_DOCUMENT_TOKEN_TO_BE_REPLACED

VANCOUVER – August 13, 2012 – Hothead Games is excited to launch an adorable update for their mobile swimming sensation, Sea Stars. With over 154 million swims started and 1 million characters mastered to date, they decided it was time players invited more nautical friends to their aquatic adventures.